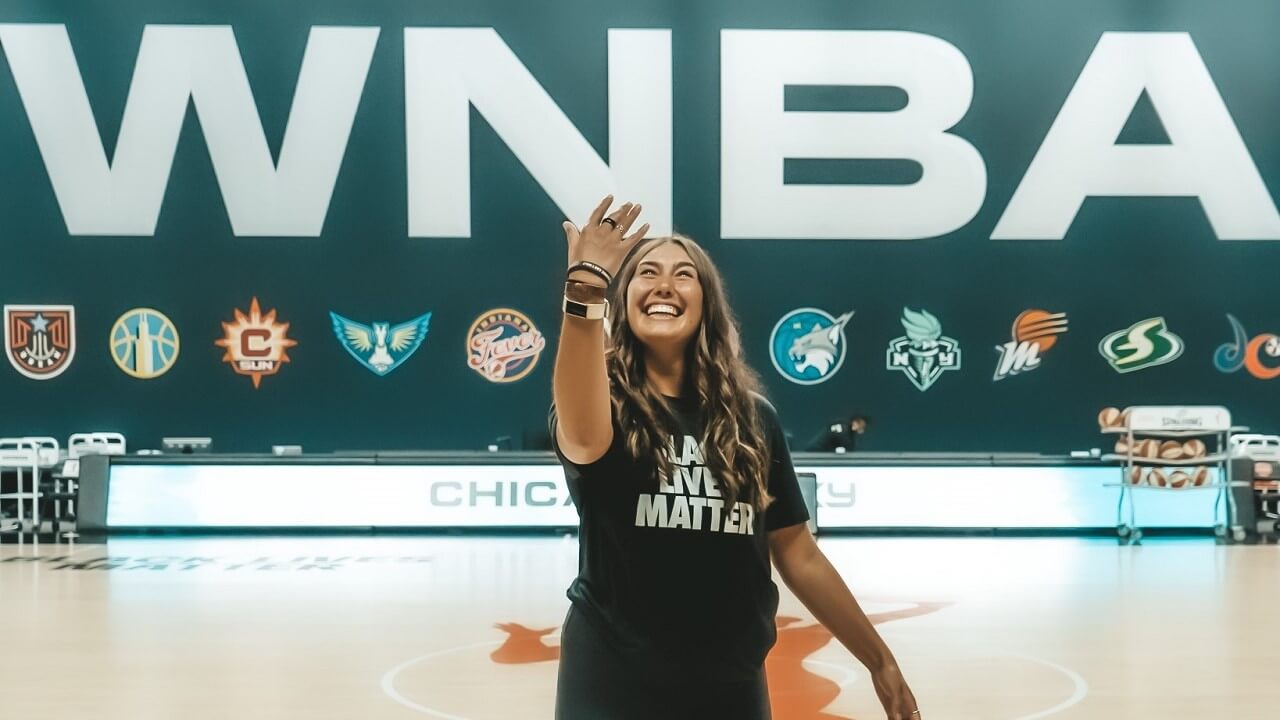 Robyn Brown, MS '19, grew up in Los Angeles where sports were the fabric of her childhood. She met her friends, grew her confidence and understood the value of being part of a team. Her coaches played an important role in shaping who she is as an athlete and as a person. Brown’s hard work on the courts paid off, and she was recruited to play basketball in college. She majored in integrated sports media and sports business.

Upon her graduation, though, Brown felt something was missing. She wanted to combine her love of sports with communication and turned to a mentor who suggested she earn her graduate degree in sports journalism. Brown’s research led her to Quinnipiac's MS in Sports Journalism program.

Her visit to Quinnipiac’s Mount Carmel Campus in Hamden, Connecticut, made her decision to move across the country and chase her dream of becoming a sports journalist an easy one.

A tour of the Ed McMahon Communications Center, People's United Center sports arena, along with an interview with the program director of the MS in Sports Journalism, solidified her choice of coming to Quinnipiac to pursue her passion. Brown was confident that this is where she was meant to be. “Attending Quinnipiac was the best decision I could have made,” she says.

Brown had never picked up a microphone before stepping on to the campus, and not even a year later she was “on the sidelines for the WNBA Connecticut Sun on NBC Sports," she recalls. "That is 100 percent credit to the professors that took the time to teach me and those that saw something in me.”

Brown put in the studio time and worked many hours to learn her craft. Through internships, she had the chance to put herself in the field and learn all sides of this industry. Today she is working for the WNBA Connecticut Sun and New England Black Wolves National Lacrosse League as the team reporter and marketing specialist.

In Quinnipiac’s MS in Sports Journalism program, Brown felt like she was learning with colleagues, not classmates. She was able to form close relationships, ask for help when needed and work together in the way she knows best, as a team. The cohort moved through the program forming great working relationships and lasting friendships.

Internships and on-campus experiences, including work at Quinnipiac’s student-run Q30 TV, paved the way for her success. Q30 TV focuses on news, sports and entertainment, and Brown found it to be a great learning environment.

Quinnipiac Professor Barry Sacks worked at ESPN for 35 years and brought his experience to the classroom. Brown was amazed that she was learning from someone who worked for an operation she views as the ultimate mecca of sports. She walked into her first day of her internship at the Connecticut Sun and saw Professor Sacks. At first, she couldn’t understand why he was there. It turns out that he was the producer for the team.

“It was such a blessing because I trusted him. He was patient with me. I had a few classes under my belt, and I was nervous.” It was a bit easier reporting on air knowing that someone believed in her.

Brown adds, “This is the kind of professor that is at Quinnipiac. It has nothing to do with them. They just want to see you thrive. I credit Professor Sacks for where I am today.”

The sports journalism program prepared Brown for her next step. Upon graduating, she was recommended for a job at the Connecticut Sun. This is a dream opportunity for her, and Brown is thriving in her position. So much so, that when the pandemic hit, they asked Brown to work in the WNBA ‘bubble’ during the 2020 season.

Lots of things changed due to the pandemic. Sports were put on pause until the NBA and WNBA made the decision to live in the bubble for three months during the 2020 season. With limited content reporters allowed, Brown was chosen by the Connecticut Sun to work and live with the players in Bradenton, Florida, for the Sun’s regular and post-season.

It may have been intense, but, “It was also an amazing experience and to be a part of a league standing at the forefront of social justice issues and using their platform to do that.” Brown amplified their voices and said it was powerful to be part of something so profound. It was an extraordinary experience for her.

Of course, Brown wanted to make sure that she gives proper credit to her ultimate support team: her parents. Her mother was the team mom, snack mom and drove her to practices and games. She played three sports in high school and her dad never missed one game even though he worked long hours.

Their commitment to their daughter didn’t end there. Brown and her dad flew across the country visiting many colleges to figure out where she would play college basketball. It was important to find the right fit. When she found Quinnipiac, they supported her once again as she moved to the East coast to fulfill her dreams of becoming a sports reporter. Reflecting on her experiences, she is most proud of the person she is becoming.

“As I grow up, I become prouder of who I am. I see the qualities I have are the virtues my parents hold,” shared Brown.

You travelled a long way to come to Quinnipiac. What was the move like from Los Angeles to Connecticut?

Once I graduated from my undergrad university in Ohio, I packed up all of my belongings into a U-Haul and drove straight to Connecticut the day after graduation! My dad drove the truck and I drove my car 515 miles to my new home.

Can you talk about how important it is for you to stay focused on your goals?

There's a line everyone uses: "You just need to get your foot in the door." While I believe that it is true. I also know that doors open to those who are bold enough to knock.

I have had dreams and goals since I was a kid — to be the star student of the month, make the varsity basketball team and become a team reporter for a WNBA team.

Your level of focus and the desire you have to turn your dreams into a reality is vital. You can't wish for something to happen. You have to work for it. The early mornings and the late nights. That's what gets you from where you are to where you want to be.

While going through your program, what was one thing you recall that was meaningful?

While going through my program at Quinnipiac, I remember the first day I sat in the chair behind the sports desk to do my first teleprompter read. I was in Professor Barry Sack's class and had to prepare my first script to read as a live segment. The rush that flowed through my veins and the endorphins I felt — it was that exact moment I knew that I was going to become a sports journalist when I graduated.

How has your experience at Quinnipiac contributed to your career?

As an aspiring sports journalist, receiving an education from Quinnipiac allowed me to build the foundation of my career today. From learning the basics of writing an open, to producing a feature, to counting down a "SportsCenter Top 10".

Quinnipiac gave me the opportunity to experience it all in front of the camera and behind. Lessons I learned in the classroom, continue to apply to my professional career today. Taking advantage of every course and extra-curricular activity Quinnipiac offered gave me the experience and confidence to work in this industry.

How did the Quinnipiac environment support your education?

The environment at Quinnipiac is special. My professors encouraged me. My classmates, who felt more like colleagues, supported me. The friends I made, while being a part of Q30 TV and QBSN inspired me to work harder and be prepared for every show and segment I ever reported on.

From basketball to baseball to lacrosse, it never felt like a competition to be the best. It was a space where we as Bobcats could grow together. Each day in the studio on campus we cheered each other on. We championed one another. We empowered each other. That's what it's all about here at Quinnipiac — being a community. "Special" is the only way I can describe what being on that campus felt like.

Quinnipiac opened the door for Brown to develop confidence and leadership skills in the broadcasting field. Brown is well on her way to reach her dreams and goals of becoming an ESPN anchor counting down the top 10 plays. If you are interested in learning more about how to become a sports journalist, explore the MS in Sports Journalism program at Quinnipiac.