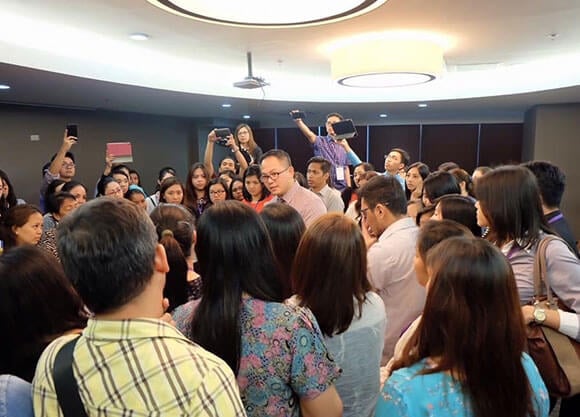 “In the Philippines, being gay is not something we often talk about with our families and the ones who do usually were ostracized,” Bondoc said. "My uncle is gay and he was kind of an outcast in Philippine society. It makes you not want to identify with being gay.”

He moved to the United States around his 21st birthday and worked as a traveling therapist for two years before settling down in his career.

At this time, Bondoc was in a committed, long-distance relationship with his then girlfriend. This relationship ended after three years.

“I started to experience a spiritual crisis and began to contemplate my identity. I was raised in a strong Catholic upbringing which considered having a gay identity as morally wrong."

Bondoc also reported that the widespread Catholicism in the country influenced the views of the society towards people who identify as gay. The media and the entertainment industry in the Philippines typically portrayed gay people as caricatures which only fed into the stigmatization of gay people.

Bondoc started to read more about different spiritual and cultural views of being gay in America. He explored communities where gayness is celebrated such as Greenwich Village in New York and Castro in San Francisco. In 2000, Bondoc moved to New York City and then to Connecticut in 2003.

“It was the dawn of the digital information and dating websites and chat groups that started to sprout in the gay community. They were a big hit.”

In 2006, the same year he joined Quinnipiac, Bondoc met his now-husband, Gerrit. Bondoc called himself an “extroverted introvert” and discussed how dating apps were a wonderful way for him to be part of the LGBTQA+ community without attending social events to meet people.

“I like talking to people but I don’t like parties, they exhaust me,” he said. “I felt like an outsider looking in when I was trying to find my place in the gay community.”

The gay community has subgroups or affinities based on similar interests, preferences and appearances. Bondoc felt that he did not fit in any of these categories. He spent a lot of time trying to figure out where he fit in and was initially uncomfortable being at the intersection of many groups.

“I learned that not fitting into a specific group and being uncomfortable was a strength,” he said. “Being at the intersection of a variety of things gave me a broader view of what it meant to be gay, my identity and that I am more than my group association.”

Bondoc said he realized not fitting into specific identities and groups did not really matter, being true to who you were as a person was more important.

Bondoc said he showcases this sentiment to his clients and to those that are exposed to his platform. When Bondoc traveled back to the Philippines on sabbatical to be a visiting professor at his former school, he was very candid with who he was and his life to his students.

“The social climate in the Philippines has changed over the past 20 years and I made a point to be open about it to the young future health practitioners that may have been attending my class,” he said.

In his clinical work, whenever he encounters patients or clients who identify as LGBTQIA+, Bondoc gives his clients validation first and is very candid with them about who he is. He understands that his successes give him a platform to speak from and he uses it to help be a mentor for other minorities and LGBTQ+ individuals. He recalled a time working with a person with cerebral palsy who wanted to transition from male-to-female. He spent a good amount of effort educating his colleagues and the clinic staff to address their discomfort when his client starting coming for occupational therapy appointments expressing her gender as a female.

Bondoc urged members of the LGBTQ+ community to not be afraid to be uncomfortable, growth comes from being uncomfortable he explained.

“It is okay if you have to explain to others due to their ignorance or lack of understanding. Their discomfort is going to be your eventual gain and change.”