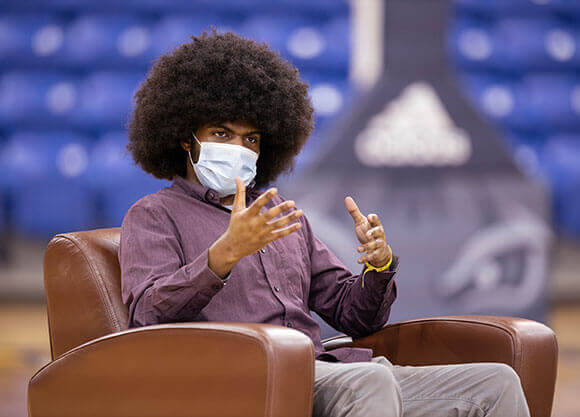 Andrew DePass, a senior majoring in biology and computer science, is a co-author of the research paper, “Activation of the Antiviral Factor RNase L Triggers Translation of Non-Coding mRNA Sequences,” which was published in Oxford Academic's Journal for Nucleic Acids Research. This research was conducted in the laboratory of Nicholas Guydosh, Ph.D, at the National Institutes of Health during the summer of 2019.

“It feels humbling to be published in Oxford’s Journal for Nucleic Acids Research,” he said. “I am extremely grateful for the opportunity to participate in research in the laboratory of Dr. Nicholas Guydosh provided by the National Institutes of Health Summer Internship Program (NIH SIP) and the National Institutes of Diabetes and Digestive and Kidney Diseases which also supported my working in Dr. Guydosh’s lab.”

Prior to the start of his project, it was identified that ribosomes were found in an unusual region of mRNA past the stop codon (the typical stop point for ribosomes) during RNase-L mediated viral response, he said.

“This region is formally known as the 3’Untranslated Region (3’UTR),” he said. “Since the main function of Ribosomes are to synthesize proteins, we wanted to know if ribosomes underwent translation in the 3’ Untranslated Region during viral response. In order to investigate this, I developed tools for the detection of ribosome translation in the 3’ UTR.”

He used 13 Reporter Plasmid Constructs that would be transfected into his experimental epithelial cells. He said each reporter construct he used contained a sequence in his region of interest, the 3’UTR, that if produced by the ribosome would show him whether or not translation occurred following western blot analysis.

DePass has been very actively involved in the Quinnipiac community through the Black Student Union. He said it provided him with an environment to feel comfortable.

“My biggest advice is to get involved with the cultural organizations on campus,” he said. “For me, I joined the Black Student Union during my sophomore year after struggles I had socially and it has made all of the difference. It is always awkward at first whenever you enter a new space but the effort you make now will pay dividends in the future.”

He was also was involved in the Washington Witherspoon Plan for Minority Equity and Systemic Change at Quinnipiac which was drafted with the support of the Multicultural Student Leadership Council last summer. He said he hopes that it serves to inform administrators on how to make Quinnipiac a better place for students of color going forward.

DePass said he appreciates his father for encouraging him to improve and for informing his commitment to make an environment for people of color within professional and academic spaces. In addition, he said he is grateful for Quinnipiac’s Science Technology and Engineering Program (QSTEP) for providing him with a comfortable environment in which he could develop skills as a student researcher.

“Following the conclusion of my undergraduate experience at Quinnipiac this May, I plan to continue my pursuit of a career in scientific research,” he said. “I aspire to have a career at the intersection of computation and biomedical science and will pursue doctoral training.”