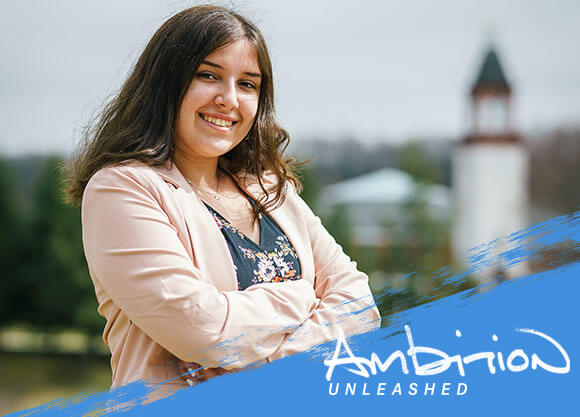 McCue developed the ideas for the video and created the course with the help of Ariela Reder, director of counseling services, and Jill Bassett, assistant dean of student affairs. The video features one-on-one interviews that she conducted with students, asking them questions concerning their overall mental health and well-being, as well as their perceptions of mental health stigmas based on their own experiences and observations.

At the end of the video, student leaders across several organizations send a message to students that conversations about mental health need to happen more often. Her goal when creating this video was that other students will see they are not alone, and that hopefully they feel more comfortable using the resources available to them.

So far, several hundred students have become aware of the university’s vast mental health resources as a direct result of her initiatives. She said she is thankful that all of the students, friends, and faculty she has shared this project with have been incredibly supportive throughout the process.

She is working to ensure that first-year and transfer students take the training course on mental health and well-being at the beginning of orientation. It began rolling out last fall.

“Before and while I worked on this initiative, I realized despite everything our students have gone through with COVID-19 and transitioning back to college, there was still this hesitation to discuss mental health and how people are actually feeling,” she said.

While McCue was already inspired to take on a mental health initiative because she saw the need for a training course, she became more inspired to create a video for it because of her own experiences.

“I don’t want anyone to feel lost, alone, or that they can’t ask for help,” she said. “So if this video could spread awareness and show students that people they know in the community have also gone through similar experiences, I will have done my job.”

McCue wanted to make sure she had a lot of different areas of the Quinnipiac community represented. She reached out to organizations on campus, including the Psychology Club, National Alliance on Mental Illness, and Quinnipiac Minority Association of Pre-Medical Students. She also reached out to some resident assistants, orientation leaders, and members of SGA and QU Culture. Between the one-on-one interviews and the part at the end with student leaders, 16 people participated in the whole video.

However, her journey also had an unexpected beneficiary: McCue herself.

"The results definitely opened my eyes to what I was able to achieve, as I never imagined myself in a position to make a difference in that way," she said. "At the beginning of the semester, I didn’t imagine this initiative would be as big as it is now."

McCue urges all undergraduate students to go on Blackboard and take a look at the training course. It will be under “My Organizations.”