Toews '17, Clifton '17 skate into the second round of NHL's Stanley Cup Playoffs 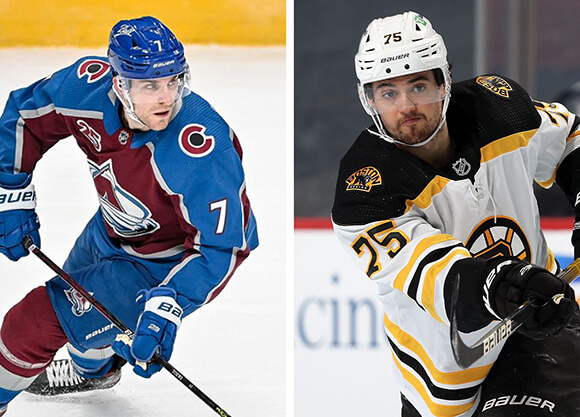 Two Quinnipiac alumni will compete in the second round of the NHL's Stanley Cup Playoffs.

Devon Toews '17, of the Colorado Avalanche, and Connor Clifton '17, of the Boston Bruins, are among the field vying for a chance to lift the Stanley Cup.

Toews and Clifton are both in the Stanley Cup playoffs for the third straight season, with Toews in the playoffs with the Avalanche for the first time after being traded in the offseason to Colorado.

Toews had the greatest NHL season of his career yet in 2020-21 as he set career-highs with nine goals, 22 assists and 31 points as well as two power-play goals. In his first season in Colorado, he played in 53 of the team's 56 games.

The Avalanche won the Presidents' Trophy as they secured the NHL's best record at 39-13-4 and 82 points.

In his career, Toews has played 169 regular season games and registered 20 goals and 57 assists for 77 points in three seasons.

In 30 career playoff games, Toews has been excellent with three goals and 12 assists for 15 points as he led the New York Islanders to the Eastern Conference Finals in 2020.

Clifton secured himself among the Bruins' top six defensemen in 2020-21 as he set career-highs with 44 games played, six assists and seven points as well as 38 PIMs. He scored his lone goal on April 21 at Buffalo, and closed out the season with strong play on the blue line.

The Bruins finished the 2020-21 regular season with a 33-16-7 record with 73 points and finished third in the East Division.

In his NHL career, Clifton has three goals and seven assists for 10 points as well as a +19 plus/minus rating and 65 PIMs in 94 games played.

In the playoffs, Clifton has scored an additional three goals and added five assists for eight points in 26 career games. He played a key role as the Bruins reached the Stanley Cup Final in 2018-19.

Second-round schedules are expected out later this week.