University community comes together for discussion on ‘RAGE’ performance 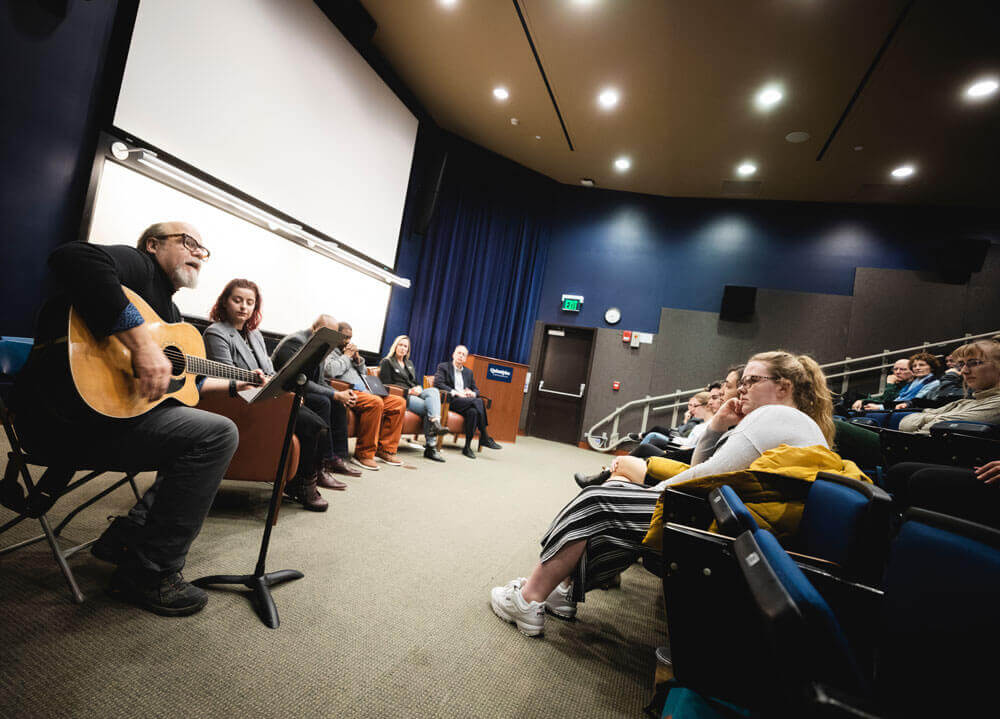 The theater department’s upcoming production of “RAGE,” which addresses gun violence in schools, was the topic of a panel discussion February 12 exploring the reasons behind its decision to take on a subject that can spark controversy.

The play is adapted from a 1970s novel by Stephen King about a disaffected teenager who murders two of his teachers and holds a group of fellow students at gunpoint. After several actual school shooting incidents in the 1980s and ‘90s, King allowed the book to fall out of print.

During the interdisciplinary discussion, held in Echlin Center on the Mount Carmel Campus, panelists discussed school shootings in the United States and the nation’s longstanding relationship with guns, the role of the humanities in understanding the human condition, and an artist’s responsibility for the impact of their work.

“We felt that the juxtaposition of a play with music and the subject of school shootings needed some context,” said psychology professor Thomas Pruzinsky, who moderated the discussion.

The play is written and directed by artist and playwright Elizabeth Dinkova, who is affiliated with the Yale School of Drama. She is one of the five panelists in attendance. She read the book as a middle school student in Bulgaria and received King’s blessing to use his material. She said her purpose for writing the play was to get at the heart of the rage that moves young people to commit acts of violence, and what in American society makes them feel it’s the only response available to them.

“It all starts with the artists,” said theater professor Kevin Daly. “I want our students to work with an artist who has integrity and a vision for what she thinks is important.”

Dinkova hopes her play reveals what she believes is the cure.

“The antidote to rage is connection and empathy,” she said, “and no other art form is as conducive to either than theater.”

Among the other panelists was Scarlet Lewis, whose 6-year-old son, Jesse McCord Lewis, was killed in the Sandy Hook school shooting in 2012. Lewis is grateful that “RAGE” addresses what she believes contributed to her son’s murder, namely the isolation and lack of connection that Dinkova referenced.

Lewis voiced her early support for the production to Daly. “When Kevin called to ask if I thought that it was a good idea, I said yes,” Lewis said. “I didn’t want to be against something, but for something.”

Lewis felt that the fear of gun violence and school shootings could and should be explored, unpacked and talked about, and that “RAGE” is a vehicle for doing so.

Lewis and Sawyer sitting in chairs at the panel, Lewis holding a microphone
Don Sawyer, Quinnipiac’s vice president for equity and inclusion, agreed, calling it “an opportunity for a transformative experience.”

Sawyer spoke about the role of higher education in keeping students safe, but also in creating “brave spaces” that facilitate open, civil discourse about emotionally loaded or unpleasant subjects.

“As an institution of higher education, we can’t say we are preparing people for the world if we shy away from difficult conversations like these,” Sawyer said.

The panel discussion was one of several events associated with the production, which premiers on February 27 at the Quinnipiac Theatre Arts Center and runs through March 1.

The book and lyrics are by Elizabeth Dinkova. She is also directing the performance. The original music and additional lyrics are by Frederick Kennedy.