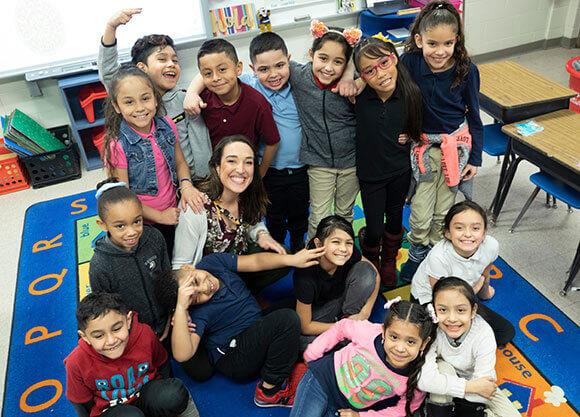 Erin Westerman, MAT ’18, has spent the last 18 months building up students and building a future.

She graduated from the School of Education with a Master of Arts in Teaching and began her career teaching a third-grade dual language program in Windham, Connecticut.

Westerman credits her Quinnipiac education for developing the tools, the classroom confidence and the networks to thrive in her own classroom.

“The biggest selling point for me was the real-world experience you get here,” said Westerman, who grew up in eastern Connecticut, not far from her new school. “Learning about being a teacher is so much different than actually doing it and managing your own classroom.”

After spending last year as a substitute teacher — different classroom assignments taught her to be flexible and adaptable — Westerman spent her final year as a co-teacher at Side by Side Charter School in South Norwalk, Connecticut. She was one of four Quinnipiac students assigned there for the 2017-18 school year.

For a long time, Westerman figured she would go to graduate school in the Boston area where she earned her bachelor’s degree. But after attending an open house at the School of Education, Westerman changed her mind.

“Sometimes, your Plan B is such a better fit for you than your Plan A,” Westerman said. “The universe has a funny way of telling you that sometimes.”

Being Peruvian, Westerman knew she wanted to incorporate Spanish into her teaching and studied it as her minor while an undergraduate, in addition to traveling to Spain and Costa Rica. So, she researched bilingual programs in Connecticut and found a shining example at North Windham Elementary School.

Westerman visited the school to learn more about its bilingual program. School officials told her there was an opening in the Compañeros Program, where students are taught in both English and Spanish.

Westerman returned to North Windham Elementary for a first interview. During her second interview, she taught a U.S. history lesson in Spanish. “While I was still in the building, I was told I was a candidate for the job,” she said.

By the end of April, Westerman was hired as a full-time teacher. Now she teaches Spanish to two classes that switch between her and her teaching partner, who teaches students in English.

“There are very few schools in New England that offer this kind of bilingual education. This is one of the strongest programs in the state. It couldn’t be a more perfect fit for me,” said Westerman

“The demands of a first-year teacher have been made so much more manageable by the experience I gained at Quinnipiac while learning to juggle a full-time internship in a school with full-time coursework.”