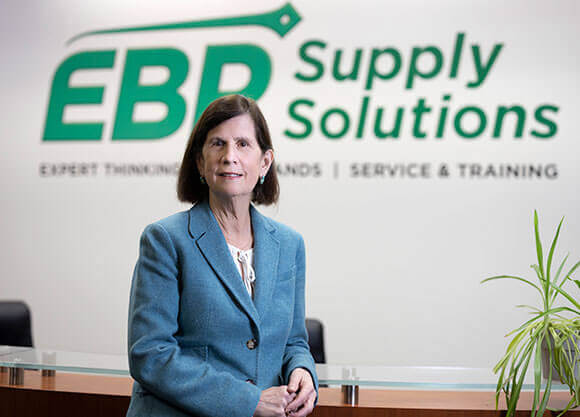 Meredith Reuben once worried about living up to the legendary man who preceded her as the head of Milford-based EBP Solutions.

He was larger than life, charismatic, and a consummate salesman who knew everything about the wholesale distribution business he inherited from his parents, she said. His name was Gerald Baum, and he was her father.

Baum named Reuben as his successor, and she joined the family business, formerly known as Eastern Bag and Paper, as director of purchasing in 1980, ascending to the CEO role in 1990 after the deaths of both of her parents eight years apart. EBP distributes top brands in the cleaning and food service categories to clients involved in hospitality, health care, education, recreation and more.

While she admired her father’s style, Reuben recognized that their leadership styles were quite different. “The greatest lesson I learned in those early years is that I did not have to act like my father. I could be just as effective if I could be authentic to my nature, my skills and my persona,” she told an audience of Quinnipiac students, staff and members of the public March 4 during a kickoff webinar for the People’s United Center for Women & Business speaker series.

Her talk, which was followed by a Q&A, was sponsored by Empower Her, and both the People’s United Center for Women & Business and Center for Innovation & Entrepreneurship.

“Many times during my career, I was an ‘only,’ or one of very few females in the room … even today. This has had an impact on me — one I’ve worked very hard to overcome,” she said.

Reuben acknowledged that initial doubts existed inside and outside her company that a woman could operate the business successfully. She dispelled them by taking the company through a rebranding process, moving the business from Bridgeport to a newly built facility in Milford, and expanding both its product line and its distribution centers from one to three. EBP celebrated its centennial in 2018.

During her career, she has established herself as a respected leader. She has served as chair of the Connecticut Business and Industry Association, currently serves on the board of directors at Bridgeport Hospital, and is a member of the International Women’s Forum of Connecticut. Beyond the local community, she serves as chair of the Council for ISSA HYGIEA, the women’s network for the global cleaning community. The mother of three was a practicing lawyer for the National Labor Relations Board in New Jersey before joining the family business.

In mentoring others, the question she hears most is: How do I communicate my value as a female leader and how do I get my voice heard more effectively?

Four strategies have worked for her, and she shared them:

• Create trust in your personal brand. Reuben said the characteristics of a woman’s personal brand should build the trust and the platform for her voice to be heard by others. “As the daughter of the boss, and eventually as the CEO, I worked hard and came prepared. With three kids and a busy lawyer husband, I chose the outside commitments I made carefully and conservatively,” she said, adding: “It’s also important to have a curious mind and be consistently learning.”

• Build the muscle to take risks. “Many times, as an only, my fear of mistakes made me freeze in my speech and my actions, and I tended to overthink what I wanted to say, especially when I was in the minority,” Reuben said. She worked to develop a thick skin and summon the courage to raise her hand and voice. “I also adopted the ethos that failure was my greatest teacher.”

• Hone your communication skills. Reuben said the use of her voice and her word choices have been powerful instruments in getting her voice heard. “Speaking naturally and varying the speed, pitch and volume of my voice for effect has been very useful. I use clear, concise words and to communicate the essence of my thoughts for proposal in terms of why it is important to the listener.”

• Develop and lean on a strong network: Describing the Center for Women & Business as a wonderful opportunity to develop a network with other women, Reuben asserted that advocacy is a team sport. “When I develop an out-of-the-box idea that affects multiple stakeholders, it is helpful for me to vet some of my ideas and get buy-in and input from others in my network.” She considers herself lucky to have been mentored by many people along the way.

“We need to connect with other women in order to thrive,” she said, noting that women are still the major caregivers for children and still face unique challenges in balancing work and home responsibilities. “And COVID has intensified these challenges, as women have left the work force at four times the rate of men since the pandemic hit.”

On a positive note, Reuben pointed out that this could be an ideal time for women to plan and start their own businesses, noting that considerable funding is available to help jump-start new enterprises. “Beta test your idea and start small. I’ve found that most successful small business leaders have already worked in that same or an adjacent industry to learn the risks, suppliers and tactics that have made other businesses successful.”

She cautioned aspiring business owners to realize that starting a business is time-intensive and requires strong support from a team of family and friends. And of course, those invaluable mentors.