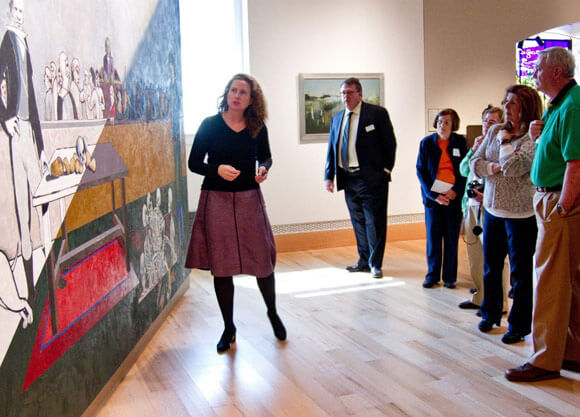 Ireland’s Great Hunger Museum at Quinnipiac University, 3011 Whitney Ave., will host an information session on Tuesday, Feb. 7, at 3 p.m. for individuals who are interested in becoming volunteer docents.

The docents will provide tours of the museum’s permanent collection and special exhibitions to groups of adults and children, from around Connecticut and the world.

“The ideal docent candidates are interested in art, Irish history, communicating with people and giving back to the community,” said Claire Puzarne, assistant director of the museum.

“Our docents will be expected to facilitate personal interaction, education and enrichment between museum visitors and the artwork, so we’re looking for volunteers who are passionate, eager to learn, enjoy working with people, flexible, articulate and comfortable speaking in public, dependable, honest, punctual and professional.”

Docents must be at least 18 years old, and will be required to attend weekly training sessions for eight weeks, beginning in March 2017. Once trained, they are expected to provide a minimum of two tours monthly, requiring approximately a four-hour commitment per month.

Applications will be accepted until March 1, and may be obtained at the information session and online at www.ighm.org.

Ireland’s Great Hunger Museum at Quinnipiac is home to the world's largest collection of visual art, artifacts and printed materials relating to the Irish Famine. The museum preserves, builds and presents its art collection to stimulate reflection, inspire imagination and advance awareness of Ireland's Great Hunger and its long aftermath on both sides of the Atlantic.

The collection focuses on the famine years from 1845-52, when blight destroyed virtually all of Ireland's potato crops for consecutive years. The crop destruction, coupled with British governmental indifference to the plight of the Irish, who at the time were part of the United Kingdom, resulted in the deaths of more than one million Irish men, women and children and the emigration of more than two million to nations around the world. This tragedy occurred even though exports of food and livestock from Ireland continued and, in some cases, actually increased during the years of the Great Hunger.