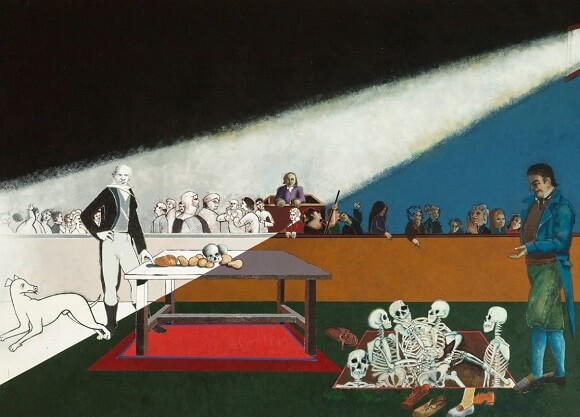 “I am pleased to note that next year the Great Hunger Museum of Quinnipiac University will be bringing their exhibition entitled 'Coming Home: Art and the Great Hunger' to Dublin and Skibbereen,” she said. “This will afford an opportunity for us in Ireland to experience the world’s finest collection of Famine-related art first hand.”

The art, created by some of the most eminent Irish and Irish-American artists of the past 170 years, will make the journey across the Atlantic from Ireland’s Great Hunger Museum at Quinnipiac University for an eight month exhibition. They will be displayed in Ireland, first at the Coach House in Dublin Castle, from March through June 2018, then at the West Cork Arts Centre in Skibbereen, from July through October 2018.

“Bringing home this important collection of Famine-related art has long been an ambition of Quinnipiac University,” Quinnipiac President John L. Lahey said. “The Famine has had particular significance with the Irish abroad and it is a true honor to bring to Ireland this profoundly moving exhibition.”

Since its opening in 2012, the museum has attracted several Irish leaders to Quinnipiac — including then-Prime Minister Enda Kenny in 2015, and current Prime Minister Leo Varadkar in 2012.

Last month, Lahey urged the Class of 2021 to visit the museum during his Welcome Weekend remarks as a way of better understanding the history of hate — and how it impacted both the Irish and 40 million Irish-Americans in the United States today.

“Our views on this area are so strong that we have a museum dedicated to antibigotry and antidiscrimination. I really want to encourage all of you as soon as you can and during your days ahead to visit our Ireland’s Great Hunger Museum,” Lahey said.

Although many people think of the museum and its collections as merely artwork, Lahey said it is an important and pertinent illustration of hatred in this world.

“Think about it, you fast forward 170 years to today. What do we have? The same biogtry, the same discrimination,” he said. “We’ve just changed the victims. So it’s not the Irish who are said to be taking away American jobs, it’s the Mexicans or Latin Americans or South Americans or Eastern Europeans now. Whatever the new immigrant group that has come to America in hope for a better life. It’s not the Catholics we are worried about or those who obey the pope. No, it’s Islam and those who follow the teachings of the Prophet Mohammad. It really unfortunately hasn’t changed very much — and I’m not even mentioning the discrimination here in the U.S. against Native Americans or African Americans that continue to this very day.”