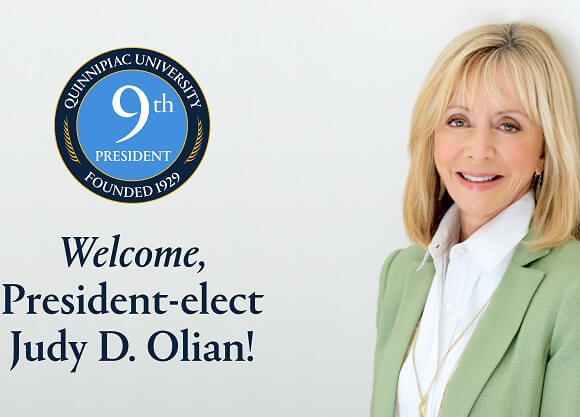 Judy D. Olian, dean and John E. Anderson Chair in Management at the UCLA Anderson School of Management, has been selected the university’s ninth president. The announcement was made by Board of Trustees Chairman William Weldon ’71 following the board’s vote on Monday, January 29.

“Quinnipiac sought a visionary leader energized by the opportunity of leading our university at a pivotal moment in its history. That leader is Judy Olian,” said Weldon, who also served as chairman of the search committee.

“She will develop and articulate a vision for the future of the university with stakeholders, including an entrepreneurial board and an engaged community of faculty, students, staff and alumni that embraces new ideas and innovative educational programs,” Weldon said. “We are confident she will build on the university's current momentum and strong foundation and will lead Quinnipiac to further impact and national recognition.”

Olian will succeed President John L. Lahey on July 1, and will visit the university periodically in the coming months as part of the presidential transition.

She will work with Lahey in the coming months as part of the presidential transition. Lahey, who has served as Quinnipiac’s president since 1987, announced his intention to retire last April, and the board of trustees opened a national search to find his successor.

Olian, the university’s first female president, has served as dean and John E. Anderson Chair at the UCLA Anderson School of Management since 2006. Under her leadership, UCLA Anderson has been ranked among the top business schools in the world. It has raised more than $400 million for student and faculty support, and for the creation of provocative and inspired programming. Olian previously served as dean and professor of management at the Smeal College of Business Administration at Pennsylvania State University, and professor and senior associate dean at the Smith School of Business at the University of Maryland.

“The opportunity to lead Quinnipiac University is especially gratifying,” Olian said. “Quinnipiac achieves strong alignment between learning and market needs and impacts a broad mix of students and professionals through life-changing development and career opportunities. Quinnipiac is a very nimble, bold and creative institution. I believe that Quinnipiac can be a model for higher education, preparing young people and professionals for work, life and citizenry in the 21st century.”

Olian was recommended to the full board of trustees by a search committee of trustees that included Weldon, vice chairman Carlton Highsmith, vice chairman David Nelson ’81, trustee William Ayers ’70 and trustee Marybeth Noonan ’82. The search committee was guided in its efforts by the global search firm of Spencer Stuart, which helps the world’s preeminent academic institutions identify and recruit leaders with the talent and credentials to thrive in today’s complex academic landscape.

The initial phase of the search included significant input from all campus constituencies, including trustees, faculty, staff, alumni and students, followed by open sessions with those groups. The next phase included the establishment of a 14-member advisory committee that was widely representative of the university community. The advisory committee reviewed the candidates, assisted the search committee in its deliberations and interviewed the finalists.

An architect of success

As dean and John E. Anderson Chair in Management at the UCLA Anderson School of Management, Olian directs a graduate business school that is universally regarded as a leader and innovator in higher education, annually providing management education across MBA, master’s and doctoral programs, and to more than 2,000 working professionals through executive education programs. The school has eight internationally recognized research centers and a global alumni network of more than 38,000 graduates.

“During her time here, more than half of Anderson’s current faculty were hired, bringing outstanding new scholars and content into the research and teaching programs,” said Scott L. Waugh, executive vice chancellor and provost at UCLA. “Four new research centers, the social impact initiative and the Anderson Venture Accelerator were launched; degree programs were introduced and expanded; hybrid course work combining online and face-to-face learning became part of the school’s portfolio; and gender diversity among faculty and students increased significantly. Chancellor [Gene] Block and I agree that Judy has shown extraordinary skill in increasing Anderson’s global reputation, and through her tireless efforts, she has created a loyal, engaged and effective alumni network.

“Also during Judy’s tenure, UCLA Anderson created an innovative, self-supporting financial model that is unique for the University of California. As a dedicated and highly successful fundraiser, Judy and her team attracted $400 million in philanthropic support,” Waugh said.

UCLA Anderson’s Board of Advisors also has expanded, attracting many prominent business leaders who represent diverse functional and global perspectives. Olian served as the 2008 chairman of the Association to Advance Collegiate Schools of Business (AACSB International), the premier business accrediting and management thought leadership organization in the world.

“She has been vital in attracting an influential set of board members around the school and its centers,” Waugh said, “enabling the naming of three research centers, 13 term and endowed professorships, numerous student fellowships and programming, and the new Marion Anderson Hall, which is currently under construction.”

Olian’s commitment to academic and teaching excellence, and her reputation as a consensus-building leader and a strong advocate for gender equity, will be missed at UCLA and welcomed at Quinnipiac.

“Judy’s impact has been felt across the university. She is a global thinker, advancing the campus’s global strategic priorities alongside Anderson’s expanding international footprint,” Waugh said. “She served for 10 years as chair of UCLA’s Council of Professional School Deans, is a member of the board of UCLA’s Technology Development Group, and was involved in many campus-wide strategic initiatives, committees and advisory groups. She is also a close friend to many of us on the UCLA leadership team.”

Olian earned her bachelor’s degree in psychology from Hebrew University in Jerusalem, and her master’s degree and PhD in industrial relations at the University of Wisconsin, Madison. Over the course of her academic career, she has been widely published in journals on human resource management, top management team composition and the business alignment of management systems.

For the past several years, Olian and Professor Peter Guber, CEO of Mandalay Entertainment and owner of the NBA’s Golden State Warriors, have taught one of the most popular courses at UCLA Anderson: Critical Milestones in Preparing for a Life in Leadership. In 2014, Olian joined leaders from the nation’s top business schools for a meeting with White House senior advisers to discuss best practices for developing workplaces that work for all Americans and better meet the needs of women and working families.

Olian also has written a weekly syndicated newspaper column and hosted a monthly television show on current topics in business. She is a sought‐after speaker and has consulted for major corporations. She serves on the boards of United Therapeutics, Ares Management and UCLA’s Technology Development Corporation, as well as the advisory board of Catalyst.

“I like being in touch regularly with the community, whether it is students, alumni, board members, faculty or administrators. I benefit from their ideas and seek different ways to connect with each,” said Olian, who has spent significant parts of her life in Australia, Israel and the U.S. “I grew up in communities around the world. I’m attracted to the purpose and mission of Quinnipiac, and its comfort in leading change. I’ve seen a remarkable trajectory of growth in this university. I am eager to partner across the community in building on that.”

Olian lives in Los Angeles with her husband, Peter Liberti.