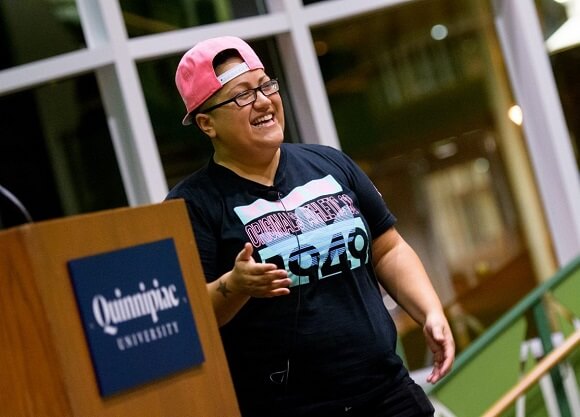 Gabby Rivera operates without a safety net, and often times, without taking a breath. She is enthusiastic and fearless, whether her weapon of choice is a microphone or a pen.

Rivera, the keynote speaker at September’s kickoff for Latinx Heritage Month at Quinnipiac, is the first lesbian Latina to write for Marvel Comics. She is the authentic voice of America Chavez, the first queer Latina superhero, the protagonist with the star-spangled wardrobe and the beautiful, brown skin.

“The only reason I’m here is because somebody in power decided not to gate-keep,” Rivera told students, faculty and staff at the Carl Hansen Student Center Piazza.

Latinx, a non-gendered term, describes someone who is from Latin America. Rivera said it is a liberating and empowering word, a platform for community, advocacy and inclusion.

And, just like the game-changing, stereotype-busting character Rivera brings to life, she knows that with awesome power comes awesome responsibility.

America Chavez is bulletproof, after all. She punches holes in other dimensions. The metaphors are everywhere for Rivera to harvest important narratives.

“I’m trying to build in a storyline right now where an administrator at [the fictional] Sotomayor University wants to enact a ban on portals in the name of safety,” Rivera said. “What she’s really doing is targeting America.”

That target, Rivera writes with burning clarity, is both America Chavez and the United States of America.

Kelsey Bombon ’18, president of the Latino Cultural Society, was responsible for much of the planning for Rivera’s appearance.

“This experience was something I’ll never forget,” said Bombon, a 4+1 MBA candidate who will earn her bachelor’s degree next May and her MBA in 2019. “You meet Gabby and you feel like she’s a friend of 1,000 years.”

Rivera grew up in a Puerto Rican family in the Bronx, N.Y., before she moved to the Crown Heights section of Brooklyn.

None of them, Rivera said, will define the Latinx community.

“Borders keep people and cultures out sometimes. You don’t get that fresh start. You have to find where you’ve been first,” Rivera said. “They tried to bury us, but they forgot we were seeds.”

“Because I’ve always been a writer, especially in queer women’s circles, there was this small audience,” Rivera said.

As it turned out, this small audience had a wide reach.

“All of a sudden, women — feminists and queer women — were blogging about it: ‘Oh, I love this book. I found this little random book.’ And then, they started talking to each other about the book and it just rippled out in that way. It became a piece of other people.”

It became a piece of Quinnipiac, too, on a night when Gabby Rivera was only too happy to share.