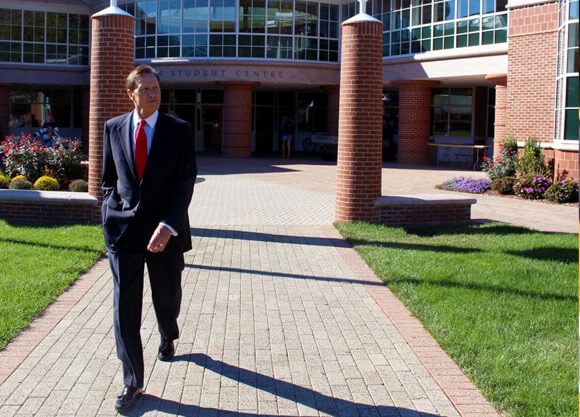 Commencement is a special time of year. It’s a time to celebrate all that a graduating class has accomplished — and a time to look ahead to a brighter future of infinite possibilities.

President John L. Lahey knows something about celebrating our graduates. He has conferred more than 40,000 of the approximately 50,000 degrees Quinnipiac graduates have earned since its founding in 1929 — and has personally signed each one with the same pen, albeit with a few ink refills.

“I have nine children — and I love each one,” he said of our College of Arts and Sciences and eight professional schools.

President Lahey has overseen the expansion majority of the university family. When he took the helm as president in 1987, Quinnipiac consisted of the College of Liberal Arts, and the Schools of Business and Health Sciences. The school now also boasts Schools of Communications, Law, Education, Nursing, Medicine and Engineering.

This year, there are two schools with important milestones to celebrate. The Frank H. Netter MD School of Medicine achieved full, permanent accreditation this spring and the graduation of the first class of doctors. In addition, the School of Engineering was founded, where it had been originally part of the School of Business.

As President Lahey marks his 31st year as president and makes plans to retire next year, he reflected on these recent milestones with deep pride and gratitude to those who contributed to these achievements.

“I couldn’t be happier to sign the 58 medical school degrees last week,” he said of the inaugural graduating class. “It’s an honor that Barbara Netter was present at the first medical school Commencement. Her late husband, Edward, was a dear friend — and they both had a lot to do with the success of the school.”

The Netters made the single largest gift in university history to found the Frank H. Netter MD School of Medicine, named in honor of their first cousin, Frank, an acclaimed medical illustrator known as “the Michelangelo of Medicine.”

In July, we are optimistic the School of Engineering will earn full accreditation — something not possible until the first class graduates this weekend. “Everyone is very optimistic,” he said. “That’s another final piece we’ve been working toward.”

The value of each member of #BobcatNation’s degree has grown with Quinnipiac — from a small regional college consisting of 1,900 students on one campus with a $3 million endowment at the start of the president’s tenure, to the 10,000 students spread across three campuses and a program in LA and a $460 million endowment today.

“Hopefully I was effective in communicating that vision,” he said as he reflected on the growth he has helped guide. “In that sense, it has been both professionally and personally gratifying to see this come to the final fruition.”

Today, Quinnipiac stands with only about 100 out of the 3,500 colleges and universities in America that have both medical and law schools — and even fewer when engineering schools are factored in.

“It’s really the culmination of all those things that places Quinnipiac among the elite universities in the state and, indeed, the United States,” he said. “Thirty years ago, I don’t think if you asked someone who has the best three colleges in Connecticut, a lot of people would include Quinnipiac.”

He said the growth of the university makes each graduate’s time at Quinnipiac more valuable — in terms of interdisciplinary learning as well as earning potential.

The Economist and The Brookings Institute has recently ranked Quinnipiac in the top 13 percent of all 4-year schools nationally for the value of education. More than 94 percent of Quinnipiac graduates recently reported being either employed or in advanced education programs within six months of graduation.

He urged the Class of 2017 to reach for the stars.

“Follow your passions and make the best use of the great education you received from your faculty and all the great experiences you received outside of the classroom — in your internships and study-abroad opportunities,” he said. “Quinnipiac has so many educational opportunities and resources and assets that we put out there for our students to take advantage of — and they have.”

He said he is confident that the students who he will be conferring degrees upon this weekend are prepared to succeed on day one.

“If they continue to follow their passion that brought them to Quinnipiac, the graduates will not only do well for themselves, their country and the world — but I am confident that they will make great leaders.”