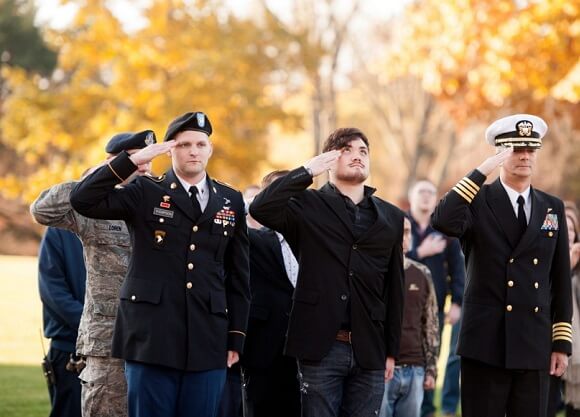 Quinnipiac University announced today that it is has been identified as one of the best private schools in the country for veterans and their families.

Quinnipiac ranked third behind The College of Saint Rose and Niagara University, both of New York, in the category for schools with fewer than 10,000 students, according to Victory Media, originator of the family of Military Friendly® employment, entrepreneurship and education resources for veterans and their families. The awards were published at https://militaryfriendly.com.

“I am proud of not only the Quinnipiac team that supports our student veterans, but the effort of the student veterans themselves,” said Jason Burke, director of veteran and military affairs at Quinnipiac. “With the billions of dollars the US. Department of Veterans Affairs spends on veteran education, schools have come under increased scrutiny over their care of these non-traditional students.”

Burke said the increased scrutiny prompted Victory Media to capture additional data from each institution to get a more holistic view of the services being offered to veterans.

“Our student veterans consistently have a retention and graduation rate that is well above the national average,” Burke said. “That shows that our faculty and staff are reducing the administrative burden on these students so they can concentrate on their mission to focus on their education.”

Daniel Nichols, chief product officer of Victory Media and head of Military Friendly® development, said, “All of our Military Friendly® award recipients set the standard for excellence. They offer exceptional examples of what it means not just to build a program that meets federal requirements, but one that serves the military and veteran community from classrooms to careers.”

For more than a decade, Military Friendly® ratings have set the standard for companies and colleges demonstrating positive employment and education outcomes for veterans and their families.

Award thresholds were set by the leading educational institution in each category below:

Award levels are defined as:

Quinnipiac is a private, coeducational, nonsectarian institution located 90 minutes north of New York City and two hours from Boston. The university enrolls 6,784 full-time undergraduate and 2,884 graduate and part-time students in 100 degree programs through its Schools of Business, Communications, Education, Engineering, Health Sciences, Law, Medicine, Nursing and College of Arts and Sciences. Quinnipiac consistently ranks among the top regional universities in the North in U.S. News & World Report’s America’s “Best Colleges” issue. Quinnipiac also is recognized in Princeton Review’s “The Best 381 Colleges.” The Chronicle of Higher Education has named Quinnipiac among the “Great Colleges to Work For.” For more information, please visit www.qu.edu. Connect with Quinnipiac on Facebook at www.facebook.com/quinnipiacunews and follow Quinnipiac on Twitter @QuinnipiacU.

About Military Friendly® and Victory Media:

The Military Friendly® Employers and Military Friendly® Schools designation process includes extensive research and a data-driven survey of leading companies and colleges nationwide. The survey, methodology, criteria and weightings are developed with the assistance of an independent advisory council of educators and employers, and tested by EY based upon the weightings and methodology established by Victory Media. The survey is administered for free. Criteria for consideration and recipients of the designation can be found at: https://militaryfriendly.com. Founded in 2001, Victory Media is a service-disabled, veteran-owned small business (SDVOSB) that connects the military community to civilian employment, entrepreneurial and
education opportunities through its G.I. Jobs®, Military Spouse, Vetrepreneur®, STEM JobsSM and Military Friendly® brands. Learn more about Victory Media at www.victorymedia.com.