Student with cystic fibrosis looks to graduate after six years 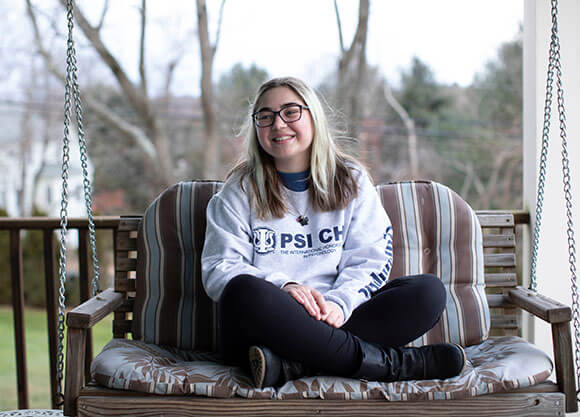 Nicole Antaya '19 will graduate in May after fighting cystic fibrosis and receiving a double lung transplant.

Nicole Antaya smiles with the full joy of a second chance and declares victory for the day. She’s grateful for another tomorrow, the gift of a double-lung transplant.

Antaya, a Quinnipiac senior psychology major, is slated to graduate in May after spending the last six years working on a bachelor’s degree while fighting cystic fibrosis, a genetic disorder marked by chronic lung infections that sharply reduce a person’s ability to breathe.

Three years ago, just as she was getting into her studies, Antaya found herself in a life-or-death struggle. As doctors measured her lung function at a near-suffocating 18 percent, they knew time was running out.

More than that, Antaya needed a new pair of lungs. A single lung transplant wouldn’t work because a lung with cystic fibrosis would compromise the transplanted lung, she explained.

Before Antaya could qualify for a transplant, she had to move to Durham with her mother and pass a battery of tests. From there, she waited for the phone call that would change her life. Finally, the call came. It was time.

Cystic fibrosis is always about time.

She was right. A 17-year-old boy named Jordan had died in a car accident, and his parents had donated his lungs.

But Antaya still had a chart full of issues after spending a month in intensive care. “You can imagine all the muscle mass I had lost. I had to learn how to walk again,” Antaya said. “But I was determined to get back to normal. Now, I go to the gym, I go for walks, and I’m back in school part-time.”

And yet, healing is not a linear process. There are good days and bad days. Antaya takes dozens of pills everyday to prevent her body from rejecting her new lungs.

Antaya’s pillbox resembles a tackle box with rows of compartments filled with colorful tablets, capsules and blister packs. She has to return to Duke every six months for checkups — every four weeks when she is in rejection — for the rest of her life.

“When you have a transplant, it’s a lifelong battle against rejection. I’m up to 83 pills a day now,” Antaya said. “A lot are anti-rejection medicines, which help suppress the immune system so my body doesn’t realize these are foreign lungs. Some are antibiotics and supplements. A lot of them are blood pressure medicines. My blood pressure in the ICU was 300 over 200. It’s better now, but that’s crazy, right?”

Perhaps, but not so crazy that it ever discouraged her from completing her degree. She is grateful for the help of Professor Anne O’Donnell Eisbach, chair of the psychology department, and several other psychology professors, including her academic adviser Penny Leisring; Gary Giumetti, the faculty adviser for the Psi Chi psychology honor society; and Thomas Pruzinsky.

“Professor Pruzinsky was always willing to work with me. It was never, ‘Oh, you’re running behind.’ His support really gave me the stamina to plow through and finish my work,” Antaya said. “I can’t speak highly enough of him. I’ve never met someone with such a high level of emotional intelligence.”

Antaya found similar support and compassion from Eisbach and her other professors.

“Professor Eisbach let me take my thesis class a semester early. People usually take it in the spring,” Antaya said. “The psychology department has been incredible with accommodations and helping me finish.”

Antaya hopes to use her experience and her education to pursue a career in social work.

Antaya’s thesis, “Developing Post-Traumatic Growth Through Trauma,” included 40 pages of research, analysis and conclusions. She said the experience, combined with her education, has inspired her to become a licensed clinical social worker someday.

“It’s very common for transplant patients to have survivor’s guilt. It’s the constant thought that these lungs — or whatever the transplant is — could’ve been given to a more deserving person,” Antaya said. “I want to help pioneer a program that covers both pre- and post-transplantation. I believe there’s a huge emotional toll to transplantation. It offers new life to the individual, but it also requires mental agility and emotional adaptability to meet your new benchmarks and goals.”

Along with her studies, research and commitment to organ donation, Antaya is a member of Alpha Delta Pi sorority and the Psi Chi honor society.

Most importantly to her, Antaya and some other students have laid the groundwork for a Quinnipiac chapter of SODA (Student Organ Donation Advocates). The new chapter hopes to run donor registration drives, host recipient and donor speakers, and dispel myths about organ donation regarding age and health.

One organ donor can save the lives of eight people, according to the organdonor.gov website. The website also notes that 138 million people in the U.S. have signed up to save lives through organ donation.

But the Quinnipiac community doesn’t have to wait for SODA to launch, Antaya said. Organ donation is quick and easy. People can sign up at organdonor.gov, RegisterMe.org or via the iPhone’s health app.