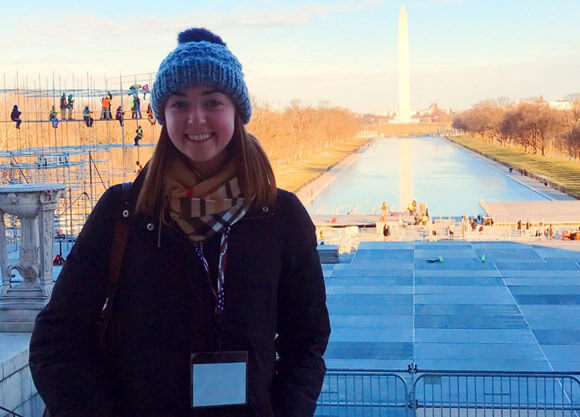 The past two weeks in Washington D.C., have been full of nonstop thrills for Antoine Campbell ’19.

“Just being at all those monuments, like the Andrew Jackson monument,” he said. “You’ve seen the pictures, but you don’t expect it to be quite so tall.”

He’s been taking nonstop photos. His favorite one? Campbell next to U.S. Sen. Cory Booker, of New Jersey. “I couldn’t believe it,” he said. “I may just be the happiest New Jerseyian ever.”

The is the fifth time that Political Science Professor Scott McLean has taken students to the nation’s capital for an intense two-week seminar that culminates with them attending the presidential inauguration. Currently, 38 Quinnipiac students are taking this 3-credit course. Their jam-packed days include morning lectures, writing papers, meeting some of the who’s who of the political world, visiting sites like the Capitol, Arlington Cemetery and the Holocaust Museum— and getting ready to attend Friday’s inauguration of Donald Trump.

“I think we got 25 or maybe even 30 students for Obama’s first inauguration, but it is usually more like five or 10,” said McLean, adding that given the historic nature of this election, he is not surprised at the increased level of interest.

Another difference this year is that the political drama has continued way past the election.

“I can’t remember so many controversial things coming up the week before an inauguration,” said McLean, noting Trump’s recent press conference and the fact that Obama’s farewell speech was turned into a rally. “These are interesting times we live in, and it is really showing in this program.”

“No matter what side you are on, this is a once-in-a-lifetime experience. Crazy stuff is happening left and right, every single day, and we’re right in the middle of it,” he said.

The political science major, who plans to attend law school, says he is impressed by both the professionalism of the program.

“You need to be in a full suit, with your little briefcase, in the auditorium by 8:45 a.m.,” as well as the content. For instance, he described a session on racial inequality as the most electric lecture he’s ever attended.

“Everybody was wide awake and enjoying it,” he said. “The speakers were all so charismatic they were literally yelling.”

Murphy Siegel ’18, a political science major who is interning for lobbyists at the Hartford, Connecticut, firm of Sullivan & LeShane, said he couldn’t pass up the opportunity to network in the nation’s capital. He also appreciates that the seminar leaders emphasize a free exchange of ideas.

“It was very interesting to hear some of the myths debunked,” he said. “There are people saying that voter turnout was at an all-time low; that’s false. I’m glad that we have lunch after the lectures because we get to chill out and think about everything. We get to consider new points of view.”

While it is hard to pinpoint a single seminar highlight, McLean said a visit to the Capitol was a clear favorite for the students.

“We toured the building, stopped by the office of [Hamden-area U.S. Rep.] Rosa DeLauro and then we headed off to the gallery to watch some real House action. It’s often quite rare. We caught it at a real fever pitch, and the students were pretty excited to see something happening on the House floor. There were bills being voted on, a little bit of debate, a little bit of speech-making. It was great.”