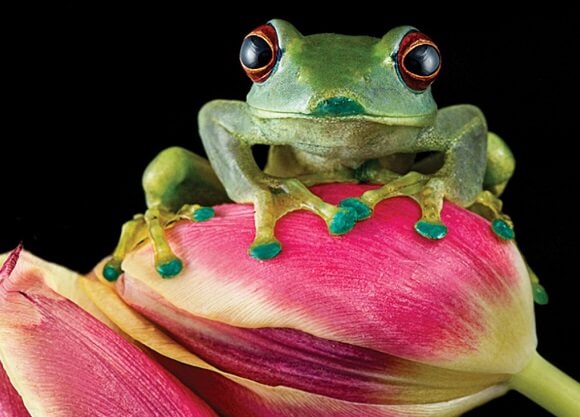 Lisa Cuchara remembers the first time she photographed a frog. It was 2012 and the biomedical sciences professor was visiting a butterfly farm in Massachusetts. She was instantly smitten when the owner brought out a red-eyed tree frog and allowed her to take pictures.

She’d already established a reputation as an up-and-coming shutterbug. A serious academic during the week — Cuchara teaches courses like Infections of Leisure and Transplantation Immunology — she spent many weekends shooting weddings alongside her photographer husband, Tom.

But after the farm visit, Cuchara and three of her photography pals decided to buy a red-eyed frog of their own from a breeder.

“It would spend a month at my house and then rotate around,” said Cuchara. “The problem was, I got lonely when I didn’t have the frog.”

Cuchara’s husband suggested she buy a few frogs of her own. “He would live to regret those words,” said Cuchara with a laugh.

Living with her models has paid off. Recently, five of Cuchara’s photos — including one of a frog perched on a calla lily — were cited in an international competition sponsored by the Professional Photographers Association. Three of the photos were selected for the esteemed “loan collection” and are currently traveling the world.

Although Cuchara has garnered local and regional awards for years, this was her first international “loan” honor. It’s all part of her busy dual life: dedicated professor and award-winning photographer. Over time, the worlds have increasingly overlapped. She teaches a biomedical photography course at Quinnipiac, advises the university’s photography club and also runs workshops for the public. How does she manage it all? “I don’t sleep much,” she said.

Growing up in a small town in the Catskill Mountains, Cuchara always liked science, nature, and yes, frogs. A camera given to her by a family friend sparked a new creative interest. “It gave me the opportunity to notice things, to pay attention to the details,” she said.

Later, at Albany Medical College, Cuchara vacillated between pursing a doctoral and a medical degree until an immunobiology rotation helped her find her niche. “I realized that I wanted to come up with a cure instead of just treating people after they get sick.”

In her first job at the National Cancer Institute, she researched how the protein Interleukin-7 could help the immune system fight cancer. She followed that up with eight years as the director of the organ transplant lab at Yale University. “I loved it,” she said. “But at a certain point I realized I liked mentoring students better.”

In 2006, the longtime immunology professor at Quinnipiac died unexpectedly, and Cuchara took his spot. The position called for “engaging students,” which Cuchara has done through several collaborative research projects. Her main areas of study include antibiotic resistance, the transmission of bacteria via inanimate objects and vaccine-preventable diseases.

Three years after arriving at Quinnipiac, she was asked to teach pathology assistant students to take photographs of specimens and other materials they may encounter during their jobs. “We photograph pig kidneys and other organisms,” said Cuchara. “We talk about what to do if you are at a crime scene and the lighting conditions are terrible. With other types of photography, we’re trying to make things look good. Dead things don’t need to look pretty. They need to look realistic.”

Despite her busy schedule, Cuchara tries to schedule a weekly frog photo session. “If you do it enough and you are patient, you can get some great shots,” she said. “People call me the frog whisperer because I seem to have a knack with them.” She credits her success to her natural affection for the frogs, as well as her commitment to handling them properly.

“You have to be very careful about having any lotions on your hands because their skin is so thin and absorbent. Even the flowers they pose with have to be pesticide-free. In winter, those flowers are hard to find, and that’s when people started buying me little cars, school buses, submarines. I even have them posing on tiny skateboards.”

She considers the frogs, which can range in price from $5 to $1,200, as pets, but admits she selects them for their looks — the more colorful the better. She notes that many people are surprised that she has a large collection of colorful poison dart frogs. She explained that, if raised in captivity, with a diet of crickets, the colorful frogs are not poisonous.

Frogs aren’t the only wildlife that fascinate Cuchara. She keeps a pair of binoculars on her desk in her office on the Mount Carmel campus because egrets, great blue herons and osprey visit the campus pond. She longs to do a series on Sleeping Giant Mountain from a spot right outside her office window.

“I want to stand right there and take the same picture every day, once a month, for a year. Then I’ll create a slide show,” she said. “I haven’t found the time to make it happen, but I will.”