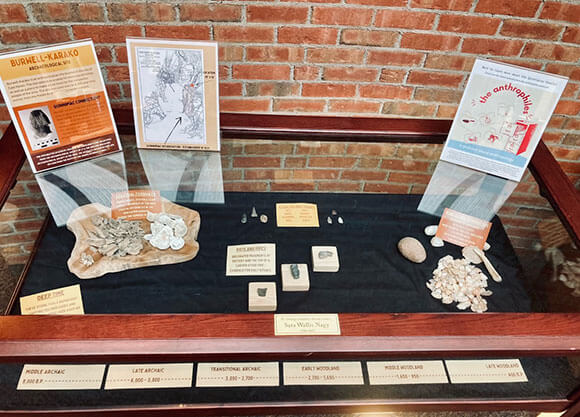 The influence of Native American culture is particularly poignant this time of year and Quinnipiac faculty are extolling the contributions indigenous people have made to the United States – especially to this campus.

In her HIS 100 course, Dickerson incorporates as many primary source documents as she can to explore indigenous culture and important events, such as the dissolution of the Great League of Peace. Students read Lakota Woman by Mary Crow Dog and writing by Charles Eastman, the first Native American to become certified in Western medicine.

Julia Giblin, an anthropology professor, often frames the technology and practices of past indigenous people by tracing their influence on current society.

“Indigenous societies around the world practice traditional forms of ecological knowledge developed over thousands of years,” she said.

Understanding and preserving Native American history is particularly important for the Quinnipiac community, Giblin explained. In her AN 233: Practicing Archaeology course, Giblin opened her classroom platform for students to explore what interested them in this context.

“Students wanted to know more about Quinnipiac descendants and where they are today. We knew from visiting lecturers that there is a big group of Quinnipiac people who moved to Wisconsin,” said Giblin. “Identity politics are also a point of interest, as I have several students who have indigenous ancestry.”

Students expressed that they weren’t sure how and if they could claim this past if it wasn’t part of their culture growing up, she said.  Together, the class explored how to respectfully navigate this path.

This includes group projects that highlight the Quinnipiac peoples’ culture. Along with the Indigenous Student Union and library staff, Giblin and her students created an exhibit for Native American Heritage Month. The displayed items span over 8,000 years: Stone tools, pottery and pipes fragments, a dream catcher and bone choker are among the artifacts.

“It’s important to listen to native people’s perspective. Since 1970, native people in New England commemorate a National Day of Mourning on Thanksgiving,” said Dickerson. “The way we put native people in that [traditional] narrative is not terribly accurate or fair.”

Understanding how Thanksgiving became a national holiday should be emphasized for a more historically truthful understanding, said Giblin.

“There was a meal after the first-year colonists had been here and they had survived because of the native peoples. Then it was kind of forgotten about, until after the Civil War in 1863 when President Abraham Lincoln saw how the country was so divided,” she said. “The ritual of Thanksgiving was invented with a seed of historical fact.”

Giblin notes how the Wampanoag people are marking the 400th anniversary of Thanksgiving in 2021.

“We should focus on what ways we can recognize the gravity of what Thanksgiving means and also use it as a time to be grateful for things that are meaningful in our lives,” said Giblin.