Fall Fest offers opportunities to have fun while learning 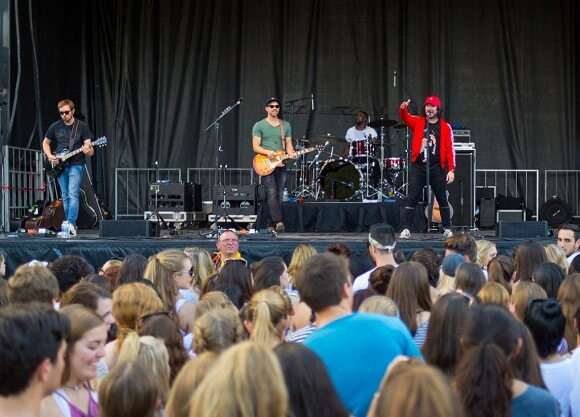 As the Plain White T’s broke into the first few chords of their pop anthem, “Delilah,” a smile broke across the face of Joe Mania ’18.

After all the hours of planning and collaboration, Mania and the Student Programming Board had delivered a rousing Fall Fest on a steamy Saturday afternoon at Quinnipiac’s South Lot.

Nearly 1,000 students danced, sang and filled their phones with photos and videos from a flashback soundtrack by the Plain White T’s and an animated performance by the green-haired front man known as The Ready Set.

For Mania, who grew up in New Jersey, Fall Fest was the latest of his seized opportunities at Quinnipiac.

“I’ve tried to spread my wings everywhere I can to get the best out of my four years here,” said Mania, the Main Stage chair for SPB, a 3+1 BS/MBA student, a tour guide with admissions and a brother in Alpha Sigma Phi.

“Not many students can say they’ve successfully managed a six-figure budget,” said Mania, who hopes to be a project manager someday. “I take a lot of pride in being able to manage that budget accordingly for both our fall and spring concerts.”

It is precisely that market-driven knowledge that Mania knows will help him land his first job.

For Erin Leaf ’21 and Sarah Dunne ’21, Fall Fest was a great introduction to one of the most popular events on campus.

“We had a lot of fun. We went with a bunch of friends and all stood up front,” said Dunne, an undeclared major from New York

For Leaf, a biomedical science major from Minnesota, Fall Fest reinforced her choice that Quinnipiac was the right school for her.

“I wanted to be on the East Coast – and this was by far my favorite,” Leaf said.

The stuffed baked potatoes the two freshmen were cradling — famously billed as a “meal in a peel” — were a big hit Saturday with the food truck set.

Fall Fest also represented a chance for Sam Prevot ’18 and Mike Ruta ’20 to take advantage of some of the unique learning opportunities at Quinnipiac.

As part of her Journalism 496 class, Prevot unpacked a tripod, camera, microphone, battery pack and more to shoot a news package at Fall Fest.

“It’s great because the work we do in class goes on my resume reel for our final project,” said Prevot, a journalism major from New York City. “This will definitely help me professionally.”

“I’m learning how to one-man-band it, as they say, and to do everything on my own,” Prevot added. “This is actually my first time going out without someone else to help me.”

Ruta, a film major from New York, is the director of publicity for SPB. He was only too happy to speak to Prevot on camera.

“As a sophomore, this is my first leadership position in SPB. I’m really excited,” he said. “I worked with marketing and videos for [Fall Fest]. I dealt with a geotag on Snapchat – pretty much anything to help get the word out.

“I really enjoyed it because I got to work with so many different people and so many different branches of SPB,” Ruta said. “It allowed me to see how much work and all the different things that go into a production like this. But it’s definitely worth it.”