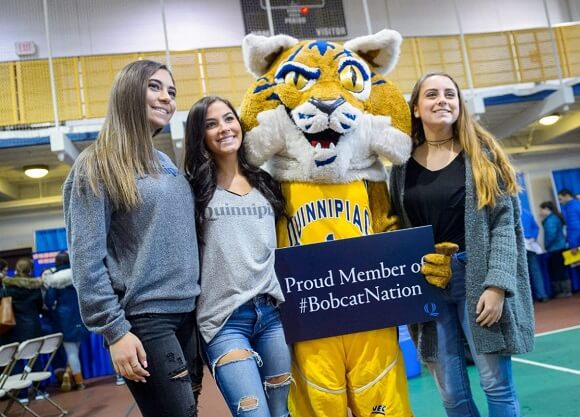 As members of our Class of 2021 learn what it means to be part of #BobcatNation, we want you to get to know where the class came from.

The 1,996 first-year students, comprised of 739 men and 1,257 women, represent more than 900 high schools — and, on average, rank in the top quarter of their high school classes.

Seventy-five percent of the freshmen come from outside Connecticut — and represent 30 states and 18 countries. Twenty-one percent of the first-year-students identify themselves as students of color — and 20% are first-generation college students.

Our School of Engineering enrolled 6% of the class, Nursing 9%, Communications 10%, Business 20%, 28% in each of the College of Arts and Sciences and School of Health Sciences.

Almost all of the students were born in 1999. Let’s take a look back at Quinnipiac, the United States and the world that year:

The Quinnipiac men’s ice hockey team played its first season as a Division I program.

In 1999, members of the men’s ice hockey team played their inaugural season in the MAAC conference, where they immediately earned a regular season championship — as the Quinnipiac Braves. (The D-I teams would become the Bobcats in 2003.) In 2005, the team joined ECAC Hockey and have since gone on to play in two national championship games in the last 5 years.

“It’s remarkable where we’ve come from,” men’s ice hockey coach Rand Pecknold said on the program’s growth and success. “It’s not even in the same stratosphere anymore.”

When the freshmen class was born, Quinnipiac was still a college — not becoming Quinnipiac University until July 1, 2000 to better reflect our growth in academics and athletics.

Lance Armstrong was pedaling his way to his first Tour de France victory. He would go on to win the race seven times, only to have his victories stripped when he was banned from the sport following a doping scandal.

The only people who knew who Tom Brady were University of Michigan football fans. The quarterback was drafted out of Michigan No. 199 overall by the New England Patriots in 2000. He has since gone on to win five Super Bowls, and is the NFL record-holder in numerous categories, including postseason wins and postseason passing yards.

The first “Matrix” film was released on the eve of the new century, securing a spot for Keanu Reeves in cinema history.

The world was introduced to Napster. Napster was originally created as a peer-to-peer file-sharing service meant for sharing digital audio files. The company ran into legal troubles, and was forced to shut down just two years after launching. Napster’s initial success gave birth to other similar services like Kazaa, BearShare and LimeWire. A popular download was “No Scrubs,” by TLC, the No. 2 song on Billboard’s Year-End Hot 100 Singles list. Cher’s “I believe” took home the top spot that year.

Unfortunately for music fans, neither song was available on the Nokia 3210, the top-selling phone of the year. Top features included “Snake” and the ability to make calls.

After a tumultuous period in American politics, President William Jefferson Clinton was acquitted of all charges against him on February 12. The previous year, Clinton famously defended himself to a Grand Jury by debating the meaning of the word “is.”

“In retrospect, the time seems almost quaint,” said Professor of Political Science Sean Duffy. “It was the beginning of our now 20-plus year intensification of divisive political strategies in Washington. Attacks by Congressional Republicans on President Barack Obama, for example, were much more intense and sustained than those they levied against Clinton. Most of the managers for the impeachment hearings have since left Congress – many of them lost their seats, and a few became notorious for their own sexual scandals.”

However, perhaps the biggest thing on everyone’s mind as the year wound to a close was if there would be a next year. Systems analysts around the world raced to crush the Y2K bug, fearing a global meltdown.

“The 2 to 3 years leading up to Y2K was a strange time,” Professor of Computer Information Systems Bruce Saulnier said. “History proved that the fears of industry were primarily unfounded – systems didn’t crash, and our economy did not grind to a stop.”

We hope you'll join us in welcoming the Class of 2021.