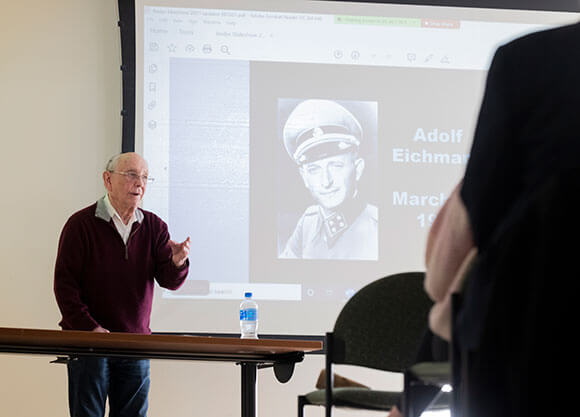 If there’s one message that Holocaust Survivor Endre (Andy) Sarkany would like to get across, it’s to replace hate with love and hope. He learned this as a young seven-year-old boy in Budapest, Hungary in 1944 during the Holocaust.

“I saw the black boots, the armbands representing Nazi Germany and heard them screaming ‘Hail Hitler.’ It was hate and killing. The lives of Jews were permanently changed. You don’t forget these things. They were thugs and hoodlums,” Sarkany said before a crowded student center lecture room on April 12.

He was speaking about his personal experiences during the Holocaust, living under the brutality of the Soviet regime in Hungary, and eventually finding a home in the United States.

Born in Budapest in 1936, the building he lived in was located inside the Budapest ghetto which is where he remained during the Holocaust. Sarkany’s father was taken to Mauthausen concentration camp in the spring of 1944 and fortunately survived.

“Children, the elderly and the weak were captured and brought to the death camps. They were told to get undressed and showered to get ready for their uniforms. They showered in cyanide gas showers, then they were taken to the crematorium,” Sarkany said.

He spoke of living in the gated ghetto community where every Jewish person in the city of Budapest moved to in the Seventh District in hopes of staying safe.

“It was completely isolated from the city of Budapest – no one came in, no one went out,” he said. “They were committed to saving as many as possible and safely housed 80,000 Hungarian Jews.”

In 1945, Sarkany was helping his mom run the house with cooking, cleaning and doing laundry (by hand, he added), when his father returned.

“I didn’t recognize him – it was a terrible sight,” Sarkany said. “He survived death camp but spent the weeks and months that followed reliving the horror.”

After WWII, Hungary became a communist nation and sometime around 1950, Soviet Communists took his father away again, he explained. Sarkany managed to go to high school, graduating in 1955. He wasn’t accepted to university because he was deemed an undesirable element of society. This label was given to anyone who owned a business before the communists took over the country.

Sarkany was fortunate to escape Hungary after the October 1956 uprising and was able to immigrate to the United States.

“We barely survived Nazis and Soviet Communism, but we survived. Not only that, but I was able to come to the greatest country in the world, the U.S.A. It took 17 days to cross the ocean and on a cloudy and snowy day, there she was, the Statue of Liberty. I cried for my freedom. There was no better sight in this world,” he said.

He received his bachelor’s degree from Tusculum College in Tennessee and his master of science degree in applied mathematics and computer science from Washington University in St. Louis, Missouri. He subsequently worked for both the McDonald Douglas Corporation and the IBM Corporation. Sarkany is married, has a daughter and son and five grandchildren. When he was 75 years old, he successfully completed his first triathlon.

“Nothing is impossible with hard work and perseverance. It doesn’t matter what you put your mind to,” he told students. “You can do it. Replace that word hate with love, hope, peace, harmony, trust, respect, stability and moving forward,” he advised.