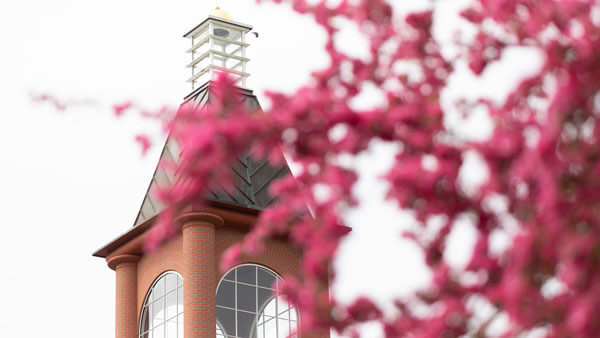 For our thousands of alumni, students, faculty and staff, Quinnipiac is more than just a place to earn a degree, it's a place to build life-long relationships. We are excited to share a few here.

From RAs in Mountainview to parenthood

Erica and Keith Yatauro met in 2011 when they were both RAs in Mountainview.

“Quinnipiac has always been a place that we were excited to go back to,” the couple agreed. “It was where we met and got to spend the most time with each other. We were lucky that our hometowns were close to each other, so we were able to spend time together even when we were not at school, but Quinnipiac was where we learned the most about each other and supported each other through highs and lows.”

Ultimately the couple would get married and have a son, Liam.

“We were very lucky to have found each other at Quinnipiac, and it will always have a special place in our hearts,” she said.

Alumni’s love for each grows in their son, a Bobcat

Tracy ‘96 and Steven Niedzwiadek ‘97 met on a blind date while they were in high school — and their love matured throughout their time at Quinnipiac.

Some of their favorite memories together at Quinnipiac include working rounds together as resident assistants and sharing stories about their pasts.

“We were both RAs for three years at Quinnipiac,” she said. “Being RAs was one of the most valuable learning experiences of our lives.”

The couple's love for Quinnipiac was also shared by her brother, Peter Currie ‘98, who was Steven’s roommate for three years.

Their heart remains at Quinnipiac as their son, Alex ‘23, pursues a degree in finance.

“The Quinnipiac University legacy continues with our son,” she said.

She encourages students to focus on their educations while at Quinnipiac.

What started as a graduation getaway with friends in Cape Cod ended up being a life-changing trip for Josh ‘97 and Dr. Jessica ‘99 Mack. The alumni have now been married for 17 years.

The couple says they met during Josh’s year at Quinnipiac but didn’t fall for each other until a graduation trip.

“We were like two ships passing in the night,” he said.

However, as time progressed, the couple realized how much they had in common.

When she noticed that he was the only person beside herself to call his mother on Mother’s Day, it all clicked for her, and she knew that he was the one. According to him, Quinnipiac held both of their values.

“Quinnipiac helped nurture the growth of our relationship through the sense of home, the proximity to the mountain and the ‘family feel’ of the community,” he said.

A favorite memory the couple shares was when he drove cross-country to see her graduate from Quinnipiac, after she decided to change her majors her junior year.

The couple got married on August 28, 2004, and now spread their love for family even further with their daughter.

“For us, it was our shared sense of adventure and our love for our families that made us fall for each other,” she said.

Sparks fly while working to enhance the student experience

The Student Government Association and Student Programming Board have historically worked closely together — with its members regularly collaborating and developing new ideas.

“When we both liked each other, we developed some banter toward the end of spring semester last year that developed throughout the summer,” said Nick Ciampanelli ‘22, president of the Student Government Association of he and Shannon Flaherty ‘22.

“Once we were back on campus this fall, it continued, if not intensified, since the SGA and SPB suites are connected, and we often went to each other’s events.”

When the time came for Ciampanelli to ask Flaherty out on a date, he said he wanted to get creative.

“He told me there was a major budget issue and pulled me into one of the offices in the SPB suite and he said SGA wasn’t able to fund one of the events SPB wanted to do,” Flaherty recalled. “I was thinking ‘aw man,’ but then he paused and said to me, ‘I have the funds to take you out on a date if you want.’”

“The list is just about endless, but one of the things I like most about Shannon is that she consistently challenges my approach or view on something,” Ciampanelli explained. “We are two very different people and we literally have the opposite Myers-Briggs test results, so there have been countless times that she pushes me outside my comfort zone and helps me grow as a person, and vice-versa.”

Flaherty said she is super appreciative of how kind and supportive Ciampanelli is to her — and everyone at Quinnipiac.

“He goes out of his way to do everything for everyone around him and puts everyone before himself,” she said. “He is very charismatic, selfless and humble.”

Ciampanelli said he feels grateful they both share a passion for improving the student experience.

“It is actually great that we both have high-level positions in SGA and SPB,” he said. “Throughout our time together, it has been great for us to bounce ideas off each other, provide advice and support and ultimately grow as student leaders.”