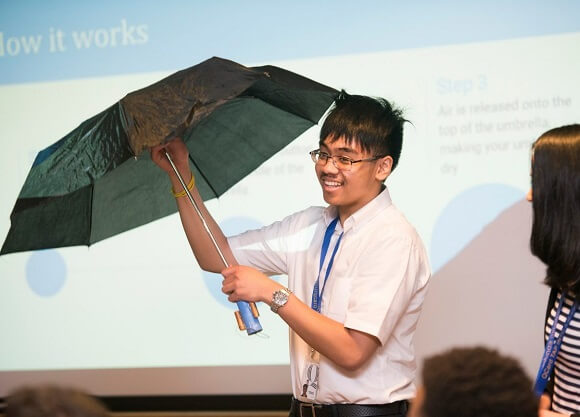 “The entrepreneurial mindset must begin early,” said Norman Gray, SELA program founder and director of our Center for Innovation and Entrepreneurship. “What we are doing here is planting that seed.”

The second annual SELA renews the Center for Innovation and Entrepreneurship at Quinnipiac’s commitment to community outreach and improvement.

The two-week program, made possible through a special partnership with the Connecticut Center for Arts and Technology (ConnCat), enabled 70 New Haven high school students to build and market viable products of their own design.

After spending a few days covering the basics of entrepreneurship, students split off into groups, rolled up their sleeves and got to work. Their product ideas varied, and included a solar-powered cooker, no-sew shirt buttons and a self-drying umbrella.

“They really surprise you with what they come up with,” said economics major Marlon Pierre-Louis ’17.

Pierre-Louis was one of several Quinnipiac students who assisted the high school students with product development. More importantly, he gave students the space to work – and to fail – independently.

Center for Innovation and Entrepreneurship

“We want these kids to understand that this is a repetitive process,” he said. “Those early failures are what teach you the most.”

SELA students quickly learned that it takes more than a good idea and a clever product name to build a successful business and brand. They had the opportunity to wear many hats — from inventor to marketer to designer.

“You have to think the way your consumer would,” said Rosie Smokes, an incoming freshman at Career High School in New Haven.

Smokes was responsible for website and logo design for her group’s product “On Point,” a pre-packaged, peel-away eye makeup system.

“I never thought I’d be doing sketching and graphic design for something like this,” she said. “It’s been really fun.”

When it came time for SELA students to build live prototypes, mechanical engineering major Dillon Sarkodie ’18 consulted them about product design, and provided them with the supplies they needed.

Much of the equipment Sarkodie supplied was novel to SELA students like Noah Swanson, a rising senior at the Metropolitan Business Academy in New Haven. Swanson and his teammates were exposed to coding and Bluetooth technology for the first time while working on “Freeze Flow,” a car air conditioning sensor meant to prevent heat stroke.

“It was challenging, but a lot less complicated than we initially thought,” he said.

Each group pitched their finished products and business plans to a panel that included Tariq Farid, founder of Edible Arrangements; and Patricia Melton, executive director of New Haven Promise, a nonprofit organization that awards college scholarships to New Haven students. A graduation ceremony hosted by ConnCAT was later held at Yale’s Science Park in New Haven.

“It was so gratifying to see these kids go from shy to proud that they, too, can be a successful entrepreneur,” said Gray. “This is something we need to do more of to help equalize the American opportunity.”