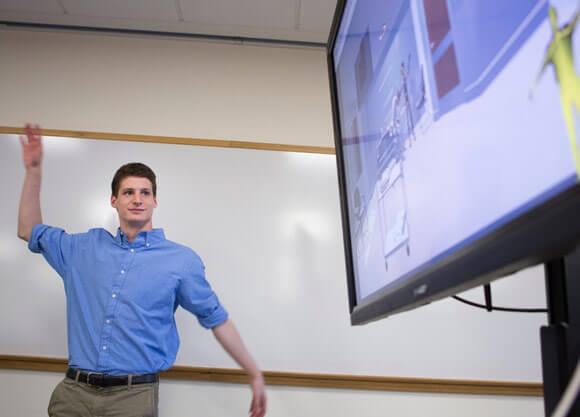 A team of Quinnipiac students and faculty have developed a virtual reality simulation that teaches patient-transfer techniques to future health care professionals.

“We were looking for a high-impact project that addressed actual problems,” said nursing professor Karen Myrick. “We found out that back injuries take the most nurses and physical therapists out of the workforce. The idea grew from there, and morphed into a major initiative.”

The simulation tracks a user’s movements through a virtual hospital setting that mimics the most common patient-transfer situations. It is customizable and offers users real-time feedback as to their posture and lifting technique. The simulation is also fully autonomous, enabling faculty to engage with students in other ways.

The project, made possible by The Center for Interdisciplinary Studies, required the collaborative expertise of students and faculty from 6 disciplines across the College of Arts and Sciences and Schools of Engineering, Health Sciences and Nursing: biomedical science, computer science, game design, industrial engineering, nursing and physical therapy.

“We’ve been doing something that has never been done before,” said physical therapy major Andrew Wolak ’18. “Prior to this, there has never been a quantifiable method of assessing patient transfer.”

As one of the health sciences students involved in the project, Wolak conducted extensive research to gather the angles for good and bad lifts. To test the right body angles, he and nursing student Gregory Guevara ‘18 tracked their own body movements through multiple patient-transfer trials.

“We performed what we considered good, mediocre and bad patient-transfers,” Guevara said. “Our biggest challenge was figuring out what the acceptable movement range was for both taller and shorter people.”

Once completed, the body-angle data was sent to engineering student Nico Northcutt ’17 and Nick Pinero ‘18, a double-major in computer science and game design. The two were directly responsible for coding each of the lifting scenarios and creating the virtual world itself.

“I had never seen a computer program be developed first-hand,” Wolak said. “Watching Nick and Nico do their work was an amazing experience.”

“We had to create the system that would track the body movement and find a way to use this information to properly inform the user,” Pinero said.

Pinero and Northcutt utilized Xbox Kinnect 2, the oculus rift and Unity programming language to create a scene that would properly track the users movements.

For Wolak and the other students involved, work on the simulation has expanded their understanding of how their majors can be applied, and allowed them early exposure to working alongside professionals from other backgrounds.

“This project was extremely challenging, but everybody was open to feedback and new ideas,” Wolak said. “I am beyond excited to resume working with everybody next year.”

While the simulation is still in its prototype phase, the team has already been discussing its other potential applications, from emergency response situations to athletics training.

“The program’s feedback system could potentially tell a rehabbing athlete if he or she is displaying at-risk biomechanics,” said Tom Martin, professor of biomedical sciences. “It’s almost endless what you can do with this.”