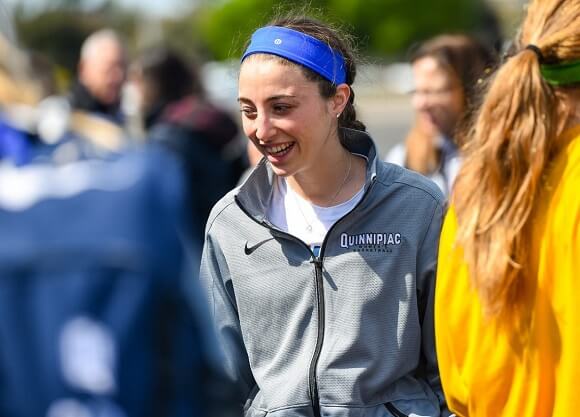 Basketball fans across the country have been introduced to Quinnipiac’s women’s basketball team over the past couple of weeks — and how talented, passionate and enthusiastic its members are.

Emily Cassata ’17, DPT ’20 has had a front-row seat to the success of the program and its players throughout the season.

“Being a student manager for the Quinnipiac women’s basketball program has been both an honor and a privilege,” she said as she flew to the Sweet 16 with the team. “I have been given the opportunity to travel all over the country, meet extremely awesome people and see their success on totally different level.”

She said she was inspired the team’s resiliency and passion.

“They knew what they wanted and they went and got it,” Cassata, a doctor of physical therapy student, said. “I have been fortunate to get to personally know the coaching staff and girls — many of whom have become some of my closest friends. Coach Fabbri is someone I look up to. She took this program from the bottom and brought them to the top. She is strong-willed, determined — and is a total boss.”

Cassata said the team has become a second family.

“As a student manager, I have seen every side of this team,” she said. “I love the fact that I can help them out with the little things, and then cheer them on at every game. I thank them so much for allowing me into this crazy family.”

Keep an eye out for Emily Cassata when you cheer on the Bobcats against top-seeded South Carolina in the NCAA Tournament's Sweet 16 at 4 p.m. ET on Saturday on ESPN.