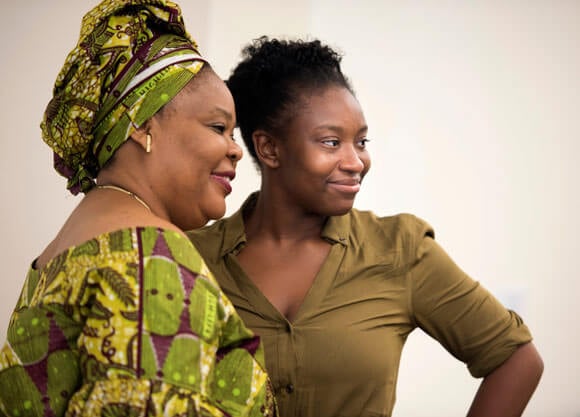 Brianna Millor ’16 learned at an early age that the only way through the doors that were slammed in her Haitian family’s face growing up was to break them down. There was no gentle opening of them.

Millor received her bachelor’s in political science and government and her master’s in public relations in 2017. She was recently appointed Senior Adviser to Boston Mayor Michelle Wu after working for several years as Civic Engagement Director for the city of Boston.

“At graduation I had very, very big goals,” she said. “I was going to take on the world.”

Millor did not disappoint. She returned to her hometown of Boston and went back into her community work with Bold Teams, which she began when she was 13-years-old.

“The organization focused heavily on food access issues and general quality of life issues around being a predominantly community of color,” said Millor.

During the summer after graduation she interned for Councilor Wu, focusing on policy around Boston and its public schools, experiencing her first real glimpse into local politics. She learned there that decision making should be based on experience and that representation matters.

“It's important to have people of different races, backgrounds, ages and cultures in leadership spaces because they are able to have a keen eye and perspective on certain issues,” said Millor.

She believes it is important for leaders to understand the impact of the policies they are creating.

Now as the senior advisor to the mayor with a specialty around community engagement, her role and responsibility are centered around making sure the proper people and stakeholders are pulled into the room to help political leaders make informed decisions.

“This piece is so important to this administration and to me as a person because community engagement drives decision-making and policy-making,” said Millor. “There is an underscore of importance that we are engaging the proper communities when we implement policy, and we need to make sure the people who are impacted are first and foremost in the room when decisions are made.”

Being the daughter of a Haitian immigrant is the driving force behind her ambition. Witnessing the strength, perseverance, creativity and innovativeness of her parents coming from a foreign country and making a life in America inspired her. She saw firsthand the access barriers (language, specifically) to those who weren't born in the United States and how certain resources needed navigation.

“That inspired me to break down the barriers and boundaries because I know how hard they were to work around,” said Millor. “The only way you can break them down is to go straight through them. I was constantly inspired by having the door shut in my family's face and figuring that I don’t need to open this door, I need to break it down.”

While her family gave her the roots to make changes, she credits Quinnipiac for giving her the tools.

“We say the youth are our future and that’s where the potential is,” said Millor. “Young people need a space to think and tinker with things and give their ideas somewhere to brainstorm and I was in that space in college – that’s the space where we can really think and start solving our world's biggest issues. College was about staying connected to friends and family, but also about surrounding yourself with people who do not look like you or live like you. I think challenging myself, getting out of my comfort zone and saying ‘it's okay to be different’ gave me power.”

Quinnipiac showed Millor it's not about how many resources and the finances people have in order to make a difference, she said.

“As a young black woman, I was taught how to push the narrative and make things possible,” said Millor.