Class of 2021 welcomed to university community, urged to fight bigotry around world 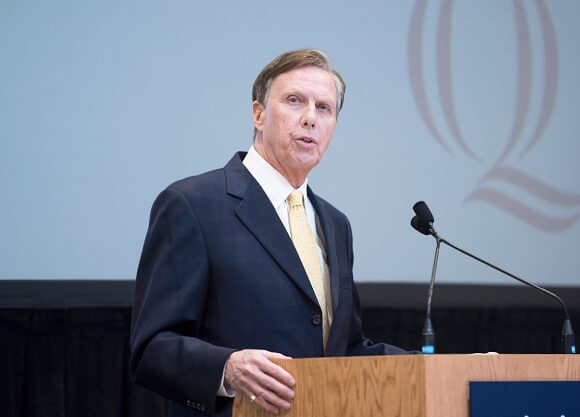 President John L. Lahey formally welcomed our Class of 2021 to #BobcatNation as part of Quinnipiac’s Welcome Weekend celebration on August 26 in the Quinnipiac Sports Center.

“You should know you are an enormously talented and able group of young people, an extremely diverse group, as well — the largest class of freshman we’ve admitted to this university in our history and, without question, the very brightest group we’ve ever admitted to this university,” President Lahey told our 2,012 freshmen. “You were selected from more than 23,000 applicants, the largest number ever.”

He challenged the students to utilize their talents and abilities to create a more tolerant and accepting world.

“We’re a diverse community,” President Lahey said. “Our sense of community is strong because we’re diverse.”

In fact, 75% of the Class of 2021 comes from outside of Connecticut — representing 28 states, the District of Columbia as well as 18 countries. Twenty-one percent of the class self-identify as students of color.

“Your individuality will not only be respected and supported on this campus, but celebrated as part of our sense of community,” he told the sea of students. “We’re looking forward to what you’ll add to this very diverse community that is here already at Quinnipiac University.”

The university champions three core values: A commitment to high-quality academic programs, a student-orientated environment and a strong sense of community. The president focused on what it means to be part of Quinnipiac’s diverse community during his welcome.

Following the recent violence in Charlottesville, Virginia, President Lahey urged the university community to come together.

“It saddens me that in 2017, if you can believe it, we still have to publicly and unequivocally condemn and state so clearly how unacceptable the views of white supremacists, Ku Klux Klan, Neo-Nazis – those views are simply not welcome here on the Quinnipiac campuses and any behavior associated with any of these despicable kinds of beliefs and activities will simply not be tolerated,” he said to loud cheers from students, faculty and staff.

“We do need to make sure we continue to reject those views, condemn them and make sure they’ll never be part of this university community,” President Lahey urged. “They’re antithetical of everything we stand for at Quinnipiac University.”

He urged members of the community to visit Ireland’s Great Hunger Museum to better understand the history of hate — and how it impacted both the Irish and 40 million Irish-Americans in the United States today.

“Our views on this area are so strong that we have a museum dedicated to antibigotry and antidiscrimination. I really want to encourage all of you as soon as you can and during your days ahead to visit our Ireland’s Great Hunger Museum,” President Lahey said.

The museum tells the story — supported by the research of leading internationally acclaimed Irish scholars at the university — of how the British, who controlled Ireland during the Famine, exported increasing amounts of food from Ireland during the period. As a result, more than 1.5 million Irish died — and 2 million more fled to America in hopes of finding a better life.

“And what did they face here in the United States in the mid 19th Century? An Anglo-Protestant-dominated culture that discriminated against them again,” President Lahey said, who explained an anti-immigration party urged those in the United States to reject the Irish saying they took away jobs from Americans.

“Think about it, you fast forward 170 years to today. What do we have? The same biogtry, the same discrimination,” he said. “We’ve just changed the victims. So it’s not the Irish who are taking away American jobs, it’s the Mexicans or Latin Americans or South Americans or Eastern Europeans. Whatever the new immigrant group that has come to America in hope for a better life. It’s not the Catholics we are worried about or those who obey the pope. No, it’s Islam and those who follow the teachings of the Prophet Mohammad. It really unfortunately hasn’t changed very much — and I’m not even mentioning the discrimination here in the U.S. against Native Americans or African Americans that continue to this very day.”

However, President Lahey told the class he was optimistic that they could do something previous generations were not able to do as effectively.

“We’ve made some progress but I’m really hoping that your generation and this diverse community will help advance not only the Quinnipiac community as a strong inclusive and tolerant community but you’ll have an effect on the wider country and wider world,” he concluded. “I have some confidence that that will happen, but you’ll need to address it in a serious and deliberate way in the weeks and months and years ahead.”

Other senior administrators and student leaders also addressed the class. The program concluded with a keynote address on the power and significance of being compassionate.