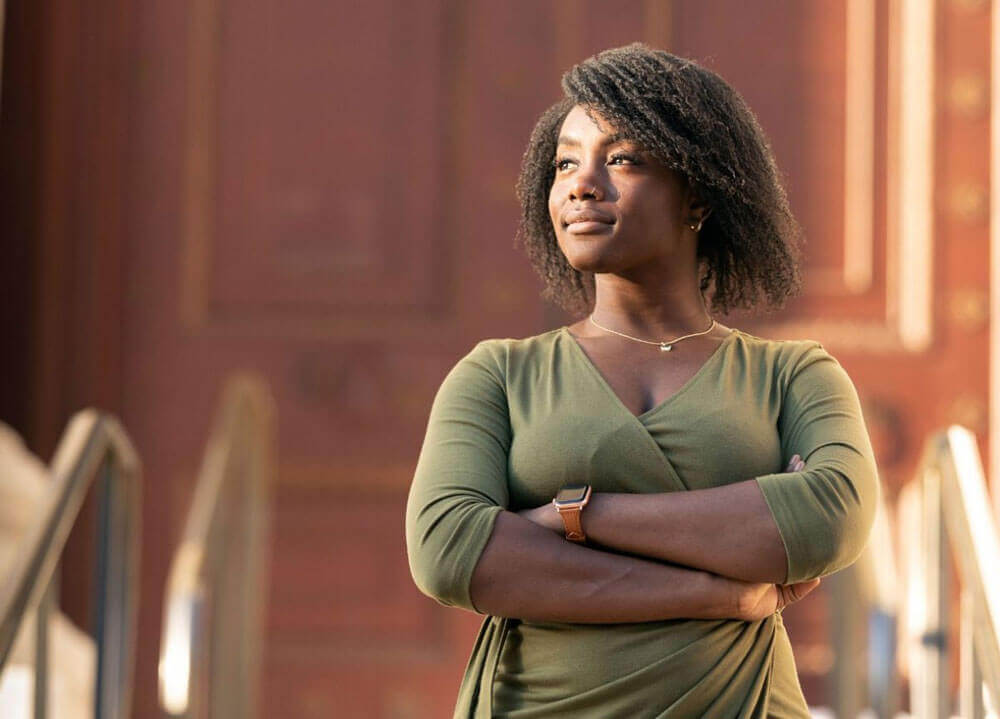 When Mercy Quaye ’13, MS ’18, arrived at Quinnipiac to major in journalism, she had one goal: to become a foreign correspondent.

“I wanted to be in Iraq; I wanted to get out of New Haven and go where the action was,” she said.

After taking a few classes, however, Quaye realized that she loved local reporting. After a stint as a newspaper reporter, she developed a growing interest in social justice. She decided to return to Quinnipiac for a master’s degree in public relations and ultimately found her calling in a career that’s focused on doing good right in her own backyard.

Quaye is the founder and principal consultant for The Narrative Project, a public relations and communications firm that caters to local mission-driven organizations. Since launching in May 2019, Quaye, who refers to herself as a ‘blacktivist’ in her Twitter profile, has quickly secured several clients including Connecticut Voices for Children, Connecticut Juvenile Justice Alliance and ConnCAT, which works to help at-risk urban youth find viable career paths. She employs three people – one full time and two part time.

“When you combine familiarity with your passion, it becomes easy to find clients,” Quaye said.

Quaye grew up in New Haven’s West River neighborhood with her mom, twin sister and a brother. At 5 years old, she was given an old-fashioned tape recorder that instantly sparked an interest in interviewing. Her subjects? Her large extended family that lived next door.

“I am privileged in the sole way that I knew what I wanted to be when I grew up at a very young age,” she said.

In high school while attending New Haven public schools, Quaye began listening to NPR and editing a student magazine; in her senior year, she began writing for the New Haven Independent. But it wasn’t until she arrived at Quinnipiac that she cemented her drive to be a journalist.

“Every class at Quinnipiac took me from theory to application,” Quaye said. “I had to become a better writer every single day; that was the only option I had.”

Upon graduating from Quinnipiac, Quaye’s first job was to cover the city of Torrington for Hearst Connecticut Media. She enjoyed the work, but two years later decided to make a switch. The Black Lives Matter movement was gaining momentum, and she found herself frequently organizing community discussions about race and getting more involved in local social issues.

“As a reporter, I was more of a bystander, and I realized that I wanted to find solutions to issues that I cared about,” she said.

While working full time in a series of jobs in the communications sector — at age 25 she snagged the role of director of communications for the New Haven Public Schools — she returned to Quinnipiac for a master’s degree in public relations. In between jobs she consulted for nonprofits. She had just started a job at Yale in 2018 when, within a few months, more than five organizations reached out to ask her to take them on as clients.

“I thought, this is a sign, and it’s what I want to be doing anyway,” she said.

Quaye believes there is a strong need for The Narrative Project in New Haven.

“We’re working with young, mission-driven nonprofits to help them get the word out so they can achieve their goals,” Quaye said. “I’m building a team of strategists—people who can tell these organizations: ‘These are the issues in front of you, and this is how we are going to address them.’” She commented that a black-owned communications firm in Connecticut is a rarity.

Some of her clients, or “project partners” as she calls them, find her through her weekly column, “Subtext,” which runs in Hearst daily newspapers. In her columns, she shares her perspectives on such subjects as police shootings, vaccines and how COVID-19 will affect the disenfranchised.

“I cover common topics from a lesser-examined lens,” she said.

Quaye this year was recognized as one of the “40 Under 40” up-and-comers by Connecticut Magazine. She credits two Quinnipiac professors with her writing and communications success: Professor Margarita Diaz, chair of the journalism program, who taught her to become an interesting writer, and associate professor Rich Hanley, who encouraged her to think about a story from a different angle.

“My newspaper column right now is heavily influenced by the lessons I learned in Professor Hanley’s class,” she said.

“She was an overall cheerleader for me and my commitment to mission-driven public relations work – a niche field that I was able to hone while working with her,” said Quaye.

When she’s not working, Quaye and her engineer husband, Jesse Snyder, enjoy hiking, rock climbing and running with their 3-year-old rescue dog. As for those dreams of living abroad?

“I have so much passion for what I’m doing; it’s so easy to get up and go to work every day,” she said. “We’re here to stay.”