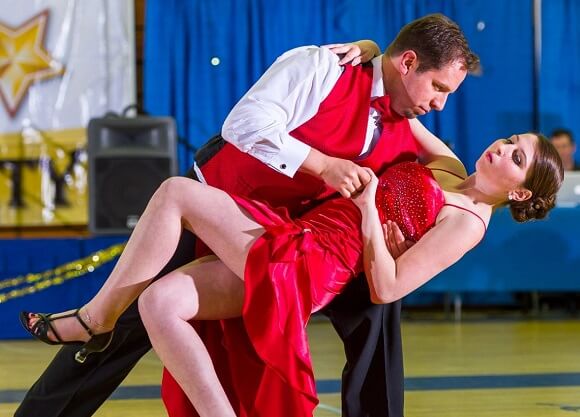 Sophisticated tuxedos, elegant gowns and ballroom dancing will transform Burt Kahn Court into the 6th Annual Dancing with the Quinnipiac Stars on Friday night. After weeks of practice, seven dance teams will perform, gliding and spinning across the floor, just like on the popular ABC television show.

Each couple is composed of a Quinnipiac Ballroom Society student member and a Quinnipiac faculty or staff member. The teams will compete for several awards, including the coveted “mirror ball” trophy.

Preliminary festivities begin at 7:30, followed by the ballroom dance routines, judging and the awards presentation. General admission tickets are $5 and will be available at the door. All proceeds will benefit the Cystic Fibrosis Foundation. You can reserve a seat or a table by emailing anastasia.epitropou@quinnipiac.edu at the ticket tables in the Carl Hansen Student Center on the Mount Carmel Campus.

The advisers to the Quinnipiac Ballroom Society –– math professor Stanley “The Stats Man” Rothman and his wife, Tara –– will perform a showcase number. This year’s dance pairings include: