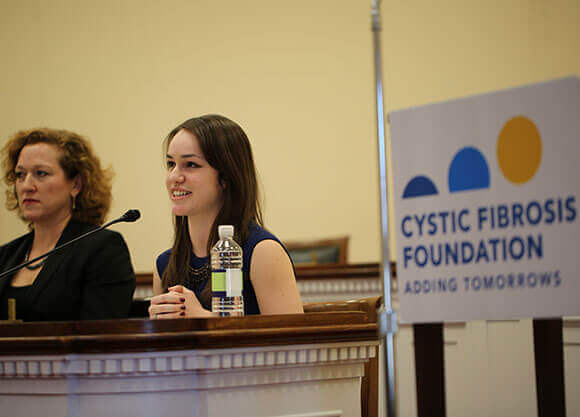 The accelerated dual-degree (3+1) advertising and integrated communications major/public relations master’s student is a key member of Q30-TV’s “Quinnipiac Tonight” on-campus sketch comedy show — who is spending the semester in our #QUinLA program. She also has Cystic Fibrosis (CF), a progressive, genetic disease that causes lung infections and limits her ability to breathe.

“What you notice first about Mara is her positivity and her energy, not her CF,” said Terry Bloom, an associate dean in the School of Communications. “She’s just one of those people who puts a smile on your face.”

Since CF doesn’t define who Cray is, she didn’t want it to define her college experience either. That’s why she chose Quinnipiac.

“Out of all the schools I looked at, Quinnipiac was the most prepared to take on disabled students,” Cray said. “Residential life, in particular, has been so supportive, making sure that I have the living situation that I need.”

Cray wanted to be part of the Living Learning Community for her accelerated dual-degree (3+1) program, but because of her special housing needs, she was unable to live in the traditional housing. Instead, she was welcomed in to the community as an honorary resident, spending lots of time in Dana Hall with other members her freshman year.

Cray doesn’t let the limitations of CF affect her academic decisions either. She chose to enroll in an accelerated degree program specifically so she could jumpstart her career.

“I loved the idea of the 3+1 program because it meant that I would get the education I need as quickly as possible,” she said. “I’m chomping at the bit to enter the workforce.”

Cystic Fibrosis is a large part of her life.

“There’s just no way around it,” she said. “When I was young, I made this subconscious decision to just own it.”

Owning it meant becoming a CF advocate who shares her journey through speaking engagements.

“Her humor is disarming and it allows her to create relationships and be an effective ambassador and advocate for CF causes,” said Bloom.

Through her advocacy, Cray is often asked what is it like to be a college student with CF.

“As practiced as I am at this lifestyle, it’s still overwhelming,” she admitted. “People who are chronically ill have to work twice as hard for the simplest achievement — like showing up to class.”

But Cray doesn’t focus too long on the complications her disease adds to college life.

“The thing is learning to navigate college with CF is similar to the normal collegiate journey. Regardless of whether you’re sick or not, you have to learn time management, grace under fire, and most importantly: who you are,” she said.