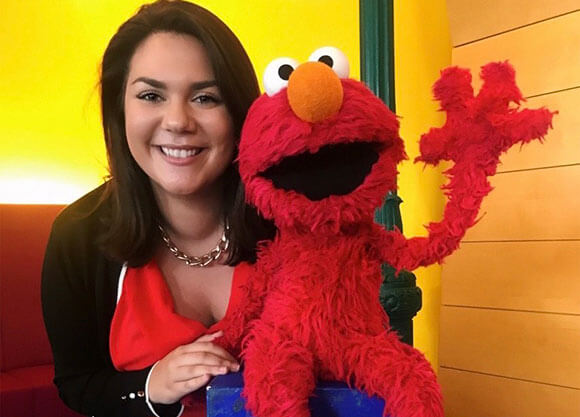 When she enrolled at Quinnipiac, Vittas thought she would ultimately end up in television as a producer, she said. She majored in advertising and integrated communications and minored in computer information systems (CIS). Vittas was heavily involved with media on campus and worked at the Q30 television station.

“Though I loved it, it made me realize what I didn’t want to do. It equipped me in the most timely way though, for background and brand storytelling experience,” said Vittas.

As part of the audience development team, Vittas contributes to the social media presences of the Sesame Street show, characters and other entities. This is where her unique combination of studies proves to be especially useful.

“I was the odd person out in CIS because I came from the communication department, but it has been so incredibly helpful. CIS is a great pairing for communications majors, as it teaches problem-solving, how to analyze systems, as well as background thought processes and telling stories through data,” said Vittas. “We learned a data visualization program called Tableau, which our team uses.”

Vittas works remotely and in the workshop’s Manhattan office. While her team operates on a variety of social platforms, Facebook provides the most widely engaged audience, she said.

The rapidly changing landscape of social media combined with the opportunity to work in entertainment alongside the Sesame Street gang has Vittas excited for the future, she said.

“I fell in love with the characters as a preschooler and now I’m learning a whole new way from them as an adult,” said Vittas.