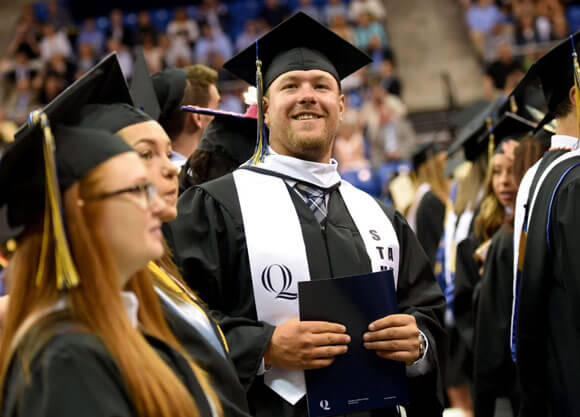 John Geanakoplos, a world-renowned economics scholar, urged the Class of 2017 to embrace what is beautiful in each of them when he spoke at the Undergraduate Commencement exercises for the College of Arts and Sciences at the TD Bank Sports Center on May 20.

“Nobody can guarantee herself success just by making a plan to succeed,” he said. “But you shouldn’t give up just because the odds are against you and you don’t know what the best move is. You have to give yourself a chance to succeed.”

Geanakoplos used the metaphor of playing chess and advised the graduates to always consider their next move.

"Pursuing what you love wisely is not always easy," he said. "There are always trade-offs. If a piece moves to one square, it must abandon another. Mistakes are inevitable. It is most important to keep your wits about you after a mistake."

"As they say in chess, it’s almost always the second mistake that kills you. If you show up, aware of your strengths and weaknesses, and you have friends, and you have a plan, then you are a good player. And as the Cuban world chess champion Capablanca put it, the good player is always lucky."

Geanakoplos, along with notable Irish citizens Máirtín Ó Muilleoir and Conor Kenny, were awarded honorary doctor of humane letters degrees. Ó Muilleoir, a Sinn Fein politician and the Lord Mayor of Belfast from 2013-14, is chairman of the Belfast Media Group publishing company, which includes the Irish Echo.

Kenny, a bookseller and art dealer, is managing director of Kennys Bookshop and Art Gallery in Galway. He has worked with collectors from around the world, including the Library of Congress and Quinnipiac.

Jason Culmone '17 encouraged his fellow graduates to reflect on their myriad of experiences at Quinnipiac — whether it was a trip to the Nobel Laureate Peace Conference or organizing a fundraiser to combat childhood cancer — to understand how those experiences helped them develop the skills of careful and deliberate thought.

His understanding of knowledge drastically shifted when he came to Quinnipiac, he said. He no longer considered knowledge the memorization of facts, but realized knowledge was about experiences and learning how to most effectively use it. Developing this ability, he said, was the purpose of the past four years at Quinnipiac.