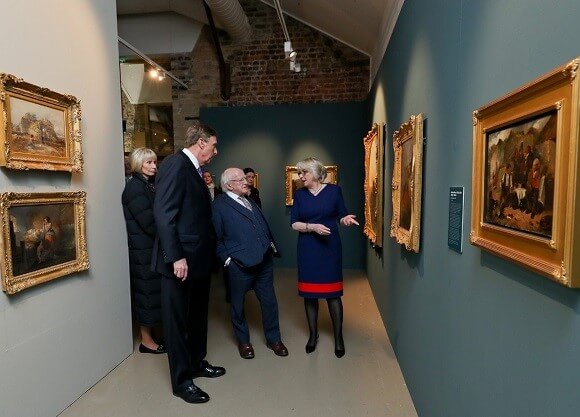 The Irish people celebrated the arrival of the world’s largest collection of Famine-related art on view in Ireland at a celebration on Wednesday in Dublin Castle.

Quinnipiac University sent its acclaimed art collection from our Ireland’s Great Hunger Museum to Ireland for a major cultural, educational and tourist event, “Coming Home: Art and the Great Hunger.”

The museum’s collection, the only one of its kind in the world, constitutes an incomparable direct link to the past of almost 6.5 million Irish and 40 million Irish-American people. The death and dispersion of 2 million people, followed by a further 2 million emigrations to the end of the century, makes the exhibition an important gesture of cultural connection.

The international tour of the exhibit which will be in Dublin through June, continue to West Cork Arts Center in Skibbereen, Ireland from July through October and then culminate at An tSeanneaglais in Derry, Northern Ireland from January through March, 2019.

“This is an exhibition that reflects not only the centrality of the Famine of 1845 to 1852 as a defining event in the making of modern Ireland but as one of the defining events in nineteenth-century global history,” Michael D. Higgins, president of Ireland, said at the opening. “It is of immense importance too to those studying the evolution of economic theory and its effect on policy, and of course it is the source of an enduring bond between the citizens of this country and millions of American citizens who today are proud of their Irish descent."

The major undertaking — which has already attracted national news coverage — aims to strengthen the deep cultural connection between Ireland and its diaspora by showcasing the world’s largest collection of Great Hunger-related art never before exhibited on Irish soil.

“The exhibition would not be here today without the tireless commitment of Dr. John L. Lahey, the president of Quinnipiac University — a university which has emerged as a leading center of understanding of An Gorta Mor through the establishment of the Great Hunger Museum and, most recently, the Great Hunger Institute, under the leadership of Professor Christine Kinealy,” President Higgins said. “This exhibition and the Famine Folios published by the Great Hunger Museum, represent a valuable and continuing contribution to what we might call Famine studies — an excavation of a past whose substance, to cite Brendan Bradshaw, is formed by disaster.”

It was a powerful night for Quinnipiac President John L. Lahey, the grandson of Daniel Leahy, a proud Kerryman.

“This truly is a homecoming both for this art collection and for me personally,” President Lahey told Irish dignitaries and guests. “I only hope my brave and desperate ancestors — who survived the Famine and in 1876 made the long journey from Ireland, first to Hamilton, Ontario and then to New York City — are looking down on us today with great Irish pride knowing that their suffering and sacrifice more than 150 years ago are being recognized today thanks in part to one of their descendants several generations later.”

“Coming Home: Art and the Great Hunger” opens to the public today — and features the historic and contemporary art of Ireland’s Great Hunger Museum, whose mission is to interpret the Famine visually. The art, created by some of the most important Irish and Irish-American artists, represents and remembers the loss of life, the emigration, the economic devastation, and the erosions of language and culture that resulted from the Famine.