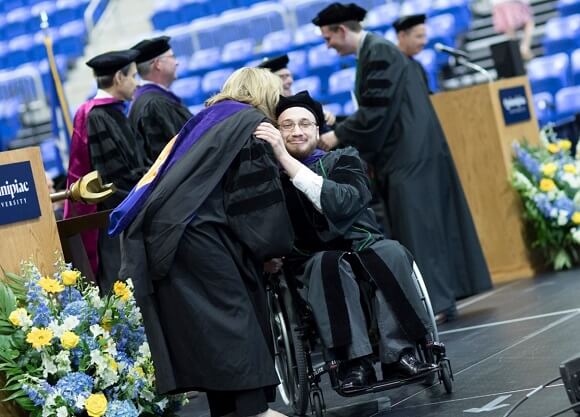 Stephen B. Bright told School of Law graduates that the great privilege of being a lawyer is to be able to provide a helping hand to all sorts of people and lift them up in ways large and small.

He addressed the 89 candidates for juris doctor degrees and their families at the May 13 morning ceremony and was awarded an honorary doctor of laws degree. Of those 89, seven earned JD/MBAs.

Bright, a professor of practice at Georgia State College of Law, spent 35 years with the Southern Center for Human Rights seeking justice for individuals facing capital punishment and for others too poor to afford legal representation. His work with the center was spotlighted in the documentary, “Finding for Life in the Death Belt.” He also has taught at Yale Law School and Georgetown Law.

In more than 40 years of practicing law, Bright said he has been amazed by what a difference having a lawyer can make. “People win their cases when they have one; some people cannot even get into court when they don’t have one.”

He told the story of an asylum seeker who showed up on time for her hearing in immigration court without a lawyer, but she went to the wrong court house.

“This seems like a small, understandable mistake that a lay person could make, but in immigration court, it was a disaster,” he said. “By the time she found the right courtroom, the judge had found that she failed to appear, and issued a deportation order against her and her son. She tried to get the judge to hear her case, but the judge refused.”

“That’s what courts do — not just immigration courts, but state and federal courts as well. They avoid justice based on some technicality, some procedural requirement.” He emphasized that lawyers must know all of the procedural rules so they don’t get tripped up," Bright side.

Individuals seeking asylum are five times more likely to win their cases if they are represented by a lawyer, Bright said. “Getting clients to the right courtroom and advocating for them once you get there are among the ways you will serve your future clients,” he remarked.

Denia Perez, JD ’18, was among the law graduates listening to Bright. She is a DACA recipient who will not be allowed to take the bar exam unless state judges amend a practice book rule that allows Dreamers to practice in Connecticut. Her hearing was scheduled for May 14. Bright called her “a compelling example of why that rule should be adopted.”

Mary Ferrari, voted professor of the year by the students, serenaded them to humorous lyrics she wrote to the tune of “My Favorite Things.”