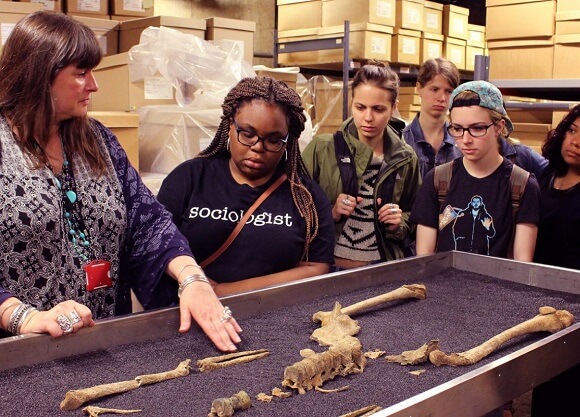 Eleven Quinnipiac students and their anthropology professor got a unique look at some of London’s earliest residents as part of a ground-breaking course that digs into the city’s oldest crypts and historic burial grounds.

“The students were able to not only read about London, history, museums, and bioarchaeology — but experience it firsthand,” Professor Jaime Ullinger said.

“They received an experience of a lifetime by visiting the skeletons at the Museum of London," Ullinger said. "The head of human osteology, Dr. Jelena Bekvalac, gave a detailed tour, discussing the impact of the plague and other major epidemics on humans in London. The visible remains of those epidemics lie in boxes in that museum. She showed students examples of some skeletons, detailing what had happened to them — including one individual who had a projectile in one of his vertebrae, and one who had been beheaded.”

In between visits to Westminster Abbey, the Tower of London, the Natural History Museum and the British Museum, the students got behind-the-scenes tours of the Centre for Human Bioarchaeology, which is the final resting place for more than 20,000 skeletons. They also received a private tour of Highgate Cemetery, one of seven planned burial grounds founded in the 19th century with the purpose of halting burial in city church yards, as well as St. Bride’s Church where hundreds of people were interred in the medieval period.

“We discussed ethical issues related to museums and collections, as well as how bodies are displayed at museums,” Ullinger said. “By visiting the narrow alleyways of London, and seeing how close other buildings are to churches, you can begin to understand why laws were passed to keep people from burying their loved ones inside these churches within the city.”

However, the students were much more than tourists. Take Deja Perry ’19.

“It was my first time out of the country,” she said. “This was an amazing group, and to experience things that a regular tourist wouldn’t have was great.”

Perry and three other students remained in London to research and work on skeletons that date back to the early 19th century beneath St. Bride’s Church with Ullinger. They identified bones, collected data and made measurements.

“This information can then be matched to parish records, giving us a lot of information about who these individuals were as living people,” Ullinger said. “The data that they collected is part of a project to see if the size of metacarpals, the bones in the hand, and metatarsals, the bones in the feet, can predict whether a skeleton is male or female. This could be used in forensic cases if other bones that are often used to identify sex are damaged. It can also be used to identify sex in skeletons from lower-class individuals who were buried nearby without coffin-plates.”

The research builds upon the lessons developed in the classroom and enables experiential learning and real-world application. In this particular case, the students prepared for the trip by studying bones at our Center for Anthropological Research.

“Doing actual research gives you a whole new perspective on learning,” said Ullinger. “You begin to understand why some studies had to exclude some bones, why some measurements are more reliable than others, and you realize how much work goes into these studies. You also begin to move from studying anthropology to being an anthropologist.”