Something to strum about 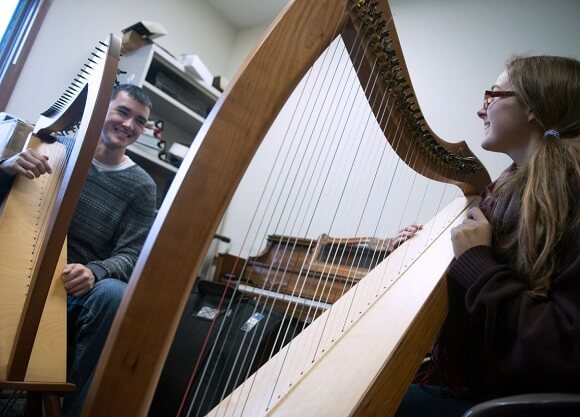 Kipp Hopper ’19 says fellow students in his dorm were shocked to hear the melodic sounds of fingers strumming strings wafting from his room one evening last fall. “I didn’t tell my roommates that I was getting a harp,” says Hopper, a pre-med student, about the used instrument he purchased for a few hundred dollars this fall. “Now they like it. Sometimes I’ll take it to someone’s room and play for a bunch of people.”

Hopper became intrigued with the harp last year after he stumbled upon one in a music classroom. “I needed some kind of hobby,” he says. “This has been a really great outlet for me.”

Hopper is not the only one to discover the joys of this ancient instrument; he is one of seven students currently studying the harp at Quinnipiac. The 1-credit class consists of individual, weekly, half-hour lessons with professional harpist Haley Hewitt. “I’ve tried playing the trombone, the piano and the guitar,” says Hopper. “But this is something I want to stick with.”

The harp program started two years ago when Daisy Melendez ’18, who had been taking harp lessons since the fifth grade, expressed a desire to continue playing at college. For the painfully shy Melendez, the harp had long been a source of joy and comfort and a way to express herself. “I remember telling my mother that it was like I was channeling God’s voice,” says Melendez, a psychology major.

The school first rented a harp. The following year two lever harps were donated, which made lessons easier. “This way professor and student can play together without having to pass off one harp,” says Hopper. “Also, if I have time in between classes, I can squeeze in a quick session.”

Hewitt recommends that most students begin their studies on a lever harp — and not on the oversized pedal harps, which measure six feet tall and weigh about 80 pounds. “It is easier to manage and it’s easier to learn on,” she says. “But if you become interested in classical music or want to play in an orchestra, then I’ll steer you toward a pedal harp.”

Lugging around a pedal harp is no easy feat, either, according to Hewitt, adding it requires the use of a special harp dolly. A new pedal harp is also a serious investment. “I compare it to buying a car,” says Hewitt. “You can get a good used pedal harp for less than $10,000. But a good new harp starts in the $20,000 to $30,000 range — and goes up from there.”

Her current college students — she had four females and three males this semester — find their way to the harp for a variety of reasons. Hewitt says that many of her students tell her that they’ve been listening to Joanna Newsom, a young harpist/pop musician who is widely credited with making the harp hip. “Some people say ‘I love the sound,’ or ‘It is just so beautiful,’ or ‘It reminds me of angels or fairies,” she says. “The music is very relaxing.”

Hewitt sets goals with each student at the first lesson. “But for their final project, they bring in something and we learn it together,” adding that students’ choices range from classic rock to video game music.

For Hewitt, it was love at first sight when she initially spotted a harp in a music store in Vermont at the age of 8. “I had never seen one before. After a few minutes of noodling around, I was able to play my piano pieces on it,” she says. “We went home with that instrument.”

By the time she was in high school, Hewitt was regularly working the wedding circuit. She earned a full scholarship to study the harp at the renowned Hartt School at the University of Hartford and later earned a master’s degree at the Royal Conservatoire of Scotland. In 2013 she won the U.S. National Scottish Harp Championship. While she used to perform at up to 300 weddings a year, she is now focusing more on writing music and collaborating with composers, Hewitt says.

And of course, teaching. “I’ve found that playing the harp is a really great way to touch people’s lives,” she says. “I’m delighted when one of my students wants to take his or her studies to the next level.”

“I remember telling my mother that it was like I was channeling God’s voice.”