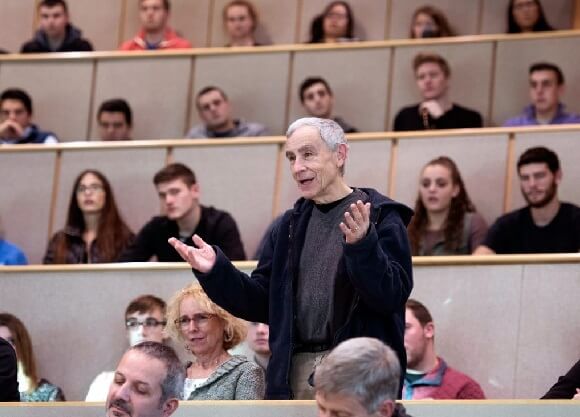 Professor Stanley Rothman, known throughout the University as “Dr. Stan the Stats Man,” is no stranger to using statistical analysis to pick winners and losers in sports. He also isn’t afraid of going against popular opinion with his choices. While many believe that the New England Patriots will easily run away with their fifth Lombardi Trophy this Sunday, Rothman offers a more conservative outlook.

“I think that this is really a pick-em game,” Rothman, a professor of mathematics, predicted. “You have two of the best quarterbacks in the game, armed with multiple receiving weapons. Add dual-threat running backs and finish it off with arguably the best game-planners in the league right now, and you can expect a high scoring explosive Super Bowl LI matchup.”

Many experts are also giving the advantage to the Patriots due to the combined Super Bowl experience of quarterback Tom Brady and head coach Bill Belichik. Rothman sees this as a superficial statistic. But, after looking at the statistics supplied by STATS, LLC on the impact of experience on the final result, he has reduced his emphasis on experience.

The statistics showed the following:

“Stats have shown that prior Super Bowl experience of the players has no real effect on the final score,” he explained.

So what will affect the final score? Rothman examined numerous statistics closely, including both teams’ regular season win-loss percentage, their points scored (PS), points allowed (PA) and their difference (PS-PA).

What stands out in the above statistics for Rothman is that Atlanta had a defensive problem in the regular season to go along with the No. 1 offensive scoring. Their explosive offensive allowed them to rank No. 2 compared to New England No. 1 with the important statistic (PS-PA). In fact, Atlanta’s 540 points ranked 8th most all time. The sum of the three ranks above clearly favors New England over Atlanta 5 to 30.

Rothman also considered the performance of quarterbacks Matt Ryan and Tom Brady over their last five games, each team’s injury list and the ability of coaches Dan Quinn and Bill Belichik to adjust late in games.

Rothman placed particular emphasis on the statistic (PS-PA), and the glaring discrepancy between Atlanta’s offensive and defensive capability. However, the Stats Man still believes that we are in for an exciting game.

“I really think the statistics show this will be a very special Super Bowl,” he said “It could very well be that the last team having possession will win the game this year.”

Another rarity, but Rothman is qualified to make such a bold predictions. A statistician with nearly 50 years of experience, his recent research has expanded upon Sabermetrics pioneer Bill James’s work to cover the NFL, NBA and NHL. His formula, which links all major sports leagues, has been cited on BaseballReference.com as an alternative to Bill James' Pythagorean Theorem of Winning Percentage. He is also the author of the book “Sandlot Stats: Learning Statistics with Baseball,” published by Johns Hopkins University Press.

So what is Rothman's prediction? His prediction is based primarily on the above statistics with experience and injuries contributing a small amount. The statistics above, the experience and the injury report all seem to favor New England. Add to this the extra motivation to receive the Lombardi Trophy from Goodell, leads him to predict a score of 31 to 27 to the next Super Bowl Champions, the New England Patriots.

Rothman has a track record of success. Most recently, correctly predicting the 2016 Chicago Cubs World Series victory — all of the way back in April.