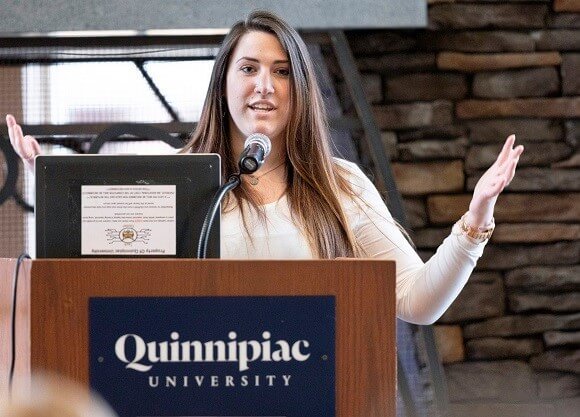 Filomena Stabile ’19 has learned a lot about prison culture this semester.

As a participant in Quinnipiac’s Inside/Out Prison Exchange seminar, the philosophy major takes a class with incarcerated men that meets weekly at the Carl Robinson Correctional Institution in Enfield, Connecticut.

On March 21, she shared observations from her class and others she gleaned from a talk by poet and activist Richard Edmond Vargas, featured in CNN’s documentary, “The Feminist on Cell Block Y," and a guest speaker at Quinnipiac in February.

“Vargas asks us to challenge the patriarchy as he did while in prison and call out injustices and microagressions when they occur,” she said.

Stabile was among 16 speakers at the university’s annual International Women’s Day Teach-in in the Carl Hansen Student Center Piazza. As with previous teach-ins, dynamic, diverse points of view were presented by faculty members and students in 20-minute talks with opportunities for student interaction. The theme for this year was “Mad/Women: Identity, Justice, and Power.”

During her talk, Stabile noted that 93 percent of the prison population in the U.S. is male. In this and all patriarchal societies, males hold power, and to the key to domination over others is money.

Matriarchy comes into play in the prison environment, Stabile explained, because women serve as the major sources of emotional and financial support for incarcerated males. Mothers, sisters and significant others generally supply the funds for commodities such as haircuts, toiletries and electronic devices, and that can spur resentment.

“Women are the backbone of any incarcerated individual,” she said, yet the men often display a form of toxic masculinity — devaluing women by using derogatory and degrading names to refer to each other.

Kimberly DiGiovanni, assistant teaching professor of civil engineering, discussed the role identity plays in the number of women entering the STEM (science, technology, engineering and math) fields. Only 20 percent of graduating engineers are women, and 2.4 million jobs went unfilled last year because of a shortage of people entering those fields, she said. This happens in spite of the fact that girls consistently outperform boys in these areas in high school and say they don’t feel competent in those areas.

“Identity is incredibly important when girls are selecting majors and deciding where they feel they belong,” she said, adding that there is a bias in our culture that associates males with the sciences and females with the arts, and it begins as early as age 7 and 8.

DiGiovanni’s mother encouraged her affinity for the outdoors and the environment. She said society needs more STEM role models for girls so implicit biases can be shifted and girls can picture themselves in those types of careers. She noted that Quinnipiac held an engineering day with Girl Scouts last year, working in teams to develop mobile apps for the benefit of several nonprofit organizations.

Sharlene Walbaum, professor of psychology, told the story of her Aunt Edna, who was diagnosed with mental illness and “put away” in an institution while still a teen. Her aunt basically was forgotten and, as Walbaum said, silenced for 50-plus years. Curious about this relative, Walbaum researched what happened to her, speaking with her social worker and others who’d come into contact with Edna. She learned that Edna was treated with kindness in her later years when she’d been transferred to a nursing home.

“In the end, she knew kindness, but I have a friend who said, ‘Kindness is good, but freedom is better,’” Walbaum said.

Other Teach-in topics included “Frederick Douglass and the Woman Question (Or are Men Mad Not to Give Women the Vote)” by Christine Kinealy, professor of history; “The ‘Mad’ Films of Nora Ephron” by Professor Raymond Foery, professor of film, television and media arts; “Speaking of Unspeakable Things Unspoken (Black Material Grief)” by Sasha Turner, associate professor of history; “How Paths of Least Resistance Perpetuate Misogyny Despite #MeToo” by Tracy Hallstead, manager of peer academic support; and “Sister Mary Thomas More: A Mad Woman for her Time” by Sean Duffy, professor of political science and executive director of the Albert Schweitzer Institute.