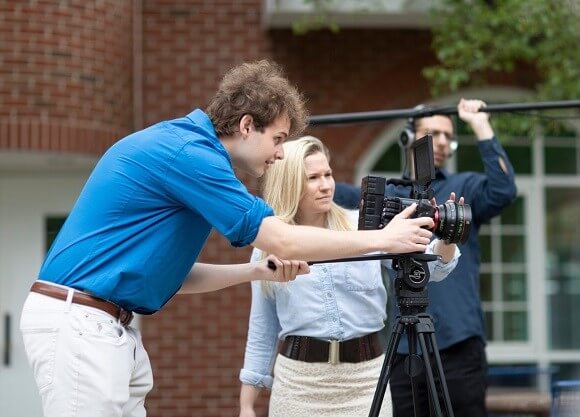 Growing up in South Africa, Greg Hardman '19, MS '20, seemed destined to become a storyteller. An avid writer and essayist in high school, his English language and literature scores on the Cambridge International Exams, a standardized test graded by Cambridge University, were among the best in the world.

While watching the movie “Inception” on a plane ride back to Johannesburg from the U.S. over the holidays in 2014, the 16-year-old Hardman had an epiphany: He’d spend his college years learning how to bring his stories to life on screen.

“It worried my parents a bit, for sure,” he said, “but I needed to exercise my creativity.”

Guided by his desire to be a filmmaker, Hardman sought out the best movies he could find, from films by modern directors such as Christopher Nolan and Quentin Tarrantino to classics directed by Stanley Kubrick and Alfred Hitchcock. He later enrolled in Quinnipiac’s Accelerated Dual-Degree (3+1) program in Film, Television and Media Arts in 2016, double-majoring in English.

Hardman’s work has already paid off — in the form of a job offer before he even earned his bachelor’s degree thanks to the skills he acquired and networking he did as part of his experience in the Quinnipiac University in Los Angeles program. However, after much thought, he ultimately decided to decline the offer and earn his master’s degree in journalism at Quinnipiac before returning to the West Coast.

“To me, the Accelerated Dual-Degree program is about timing,” Hardman said.

Hardman immersed himself in all aspects of film-making. By his sophomore year, he was working as a production assistant in Quinnipiac’s Office of Integrated Marketing Communications, which produces media content across the university.

Hardman’s most formative experience, however, came in Summer 2018, when he took part in the QU in LA program. He secured an internship with Franklin Entertainment, a dynamic, multimedia entertainment company and Fox-affiliate owned by actor and entrepreneur DeVon Franklin.

“In a word, it was amazing,” Hardman said.

Hardman began by doing script coverage for films being considered for production and eventually managed to turn his internship into an assistantship. He handled itineraries, scheduling and various errands around Los Angeles — and also found himself having lunch with studio executives, including Franklin, on a regular basis.

“DeVon told me that I will go far in the industry, which was enthralling to hear from a producer,” Hardman said.

Despite all of the success he enjoyed during his internship, some of Hardman’s best memories originated off the Fox lot. While having lunch in a West Hollywood restaurant one afternoon, he and his girlfriend were approached by a director who needed two extras for a music video.

“That was a no-brainer,” said Hardman, with a chuckle.

The video, made for the song “If You Really Love Nothing” by alternative/indie rock band Interpol, features actors Kristen Stewart and Finn Wittrock. It has garnered millions of views on YouTube.

Since returning from LA, he has remained very active — writing his first feature-length screenplay this summer and preparing for a project this fall where he will write and direct.

Looking beyond graduation, Hardman has left all avenues open.

“At this point, I’m just trying to find myself in the industry and set goals for myself,” he said. “The first one is definitely to move out to Los Angeles after I graduate.”