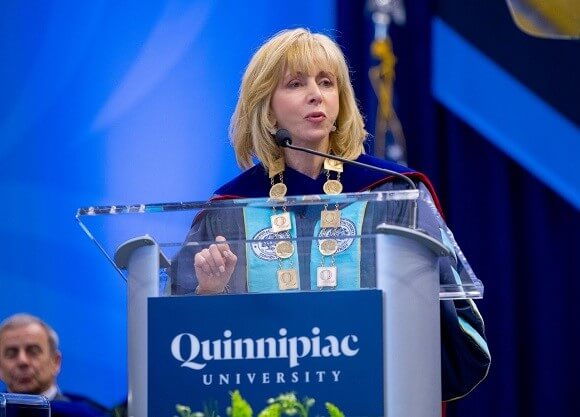 History was made today as Dr. Judy D. Olian was inaugurated as the university’s 9th president.

“It may seem odd to anyone not from academia to hold an inauguration at the end of both a semester and the school year,” Olian said. “Yet as I finish my first year as president of Quinnipiac and begin my official term, it strikes me that this is the perfect metaphor for Quinnipiac. This is a university defined by constant beginnings.”

Olian was introduced by Board of Trustees Chairman William Weldon ’71, the retired chairman and CEO of Johnson & Johnson. Later in her speech, Olian announced that Weldon and his wife, Barbara ’71, recently donated $15 million — the largest gift in the university’s history — to support Olian’s strategic plan for building the University of the Future.

“Quinnipiac sought a visionary leader energized by the opportunity to lead our university at this pivotal moment in our history. That leader is Judy Olian,” Weldon said. “She’s developed a vision for the future for the university supported by an entrepreneurial and enthusiastic board of trustees.”

“It’s a privilege to be among people who – in many different ways – are integral to the uplifting and noble pursuit of learning,” President Olian said. “Whether as a teacher, an administrator, a trustee, a spiritual leader, a staff member, or as a student — higher education is an experience that transforms a life.”

The president said at each juncture in Quinnipiac’s history, those who came before us made “daring choices” backed by action.

“In former President Samuel Tator’s day, this might have been called moxie,” Olian said. “Today, we would describe it as nimbleness or audacity. It is the spirit of the bobcat, our mascot: fierce, always moving, and surprisingly capable of prevailing in challenges much larger than its size would suggest.”

Olian made a point of addressing the accessibility of higher education.

“Education is a human right — and we will do our part,” Olian pledged with resounding applause from throughout the arena.

The keynote speaker and University of Oregon President Michael H. Schill, JD, also talked about the importance of accessibility to higher education, and the unique challenges in higher education today.

“The Board of Trustees has made a brilliant decision in selecting Dr. Judy Olian to lead Quinnipiac University,” he said. “She is uniquely equipped to navigate the modern challenges of higher education.”

Following the inauguration, members of the university community converged in the Rocky Top Student Center for a reception and to paint four murals to be installed at Yale New Haven Hospital with the hope of lifting the spirits of pediatric patients.

The art, which highlights parts of the area, is designed to bring comfort to patients and their families by giving them something soothing to look at. One of the murals painted, for example, featured a bobcat.

Also at the student center were three faculty-led discussions on the future of democracy, education and nutrition.

As part of the weeklong inaugural celebration, the Department of Visual and Performing Arts offered a sampling of student work at the Theatre Arts Center at the Taste of the Arts event.

In addition, student artwork was on display, and visitors tried their hands at video games created by game design and development students.

Deborah Mawhirter, a member of the Parents Council, came to watch her daughter, Nicole, a junior physical therapy major who sang with the QU Singers. She also performed in “Little Shop of Horrors” and “The Wild Party” throughout the past two years.

“This program was amazing. Nicole was not a theater major, but she was able to carry on her passion with the arts here,” she said.

Quinnipiac also showcased the work of students and their faculty advisers from the College of Arts and Sciences and the university’s eight professional schools at the Innovation Expo yesterday.

Students presented projects at the event ranging from the application of data and audience engagement to better understanding hunger in Hamden to using calculus to predict the spread of a future Ebola outbreak based on 2014 data from Sierra Leone.

“Differential equations aren’t my strong suit, so I really had to work hard,” said Abigail Long, a senior math major. “I also learned how math can be used in so many different ways.”

The event illustrated the breadth and scope of Quinnipiac's mission to build the University of the Future by challenging and supporting its community to create tangible outcomes that will not only put them at a competitive advantage, but also create engaged global citizens.

The weeklong, community-wide inaugural celebration kicked off days earlier with an engaging mentorship event that brought Hamden and North Haven high school students together with our students and faculty to participate in presentations and activities exploring what it means to be a good, global citizen.

During the ceremony, quoting former British Prime Minister Winston Churchill, President Olian said, “To improve is to change; to be perfect is to change often.”

Quinnipiac is a place of constant beginnings, she said; it is preparing civically-engaged and 21st century-ready graduates who will advance society, nurture the well-being of its community and hunger to be a force of good in the broader world we share.

“I pledge to do my utmost on behalf of Quinnipiac — honoring its past, celebrating its present and anticipating its bright future that is uniquely its own,” she said. “I am moved by Quinnipiac’s embrace of Pete and me, and nourished by the faith I have in the people who make this institution what it has become, who will build the bridges to what it has yet to be.”