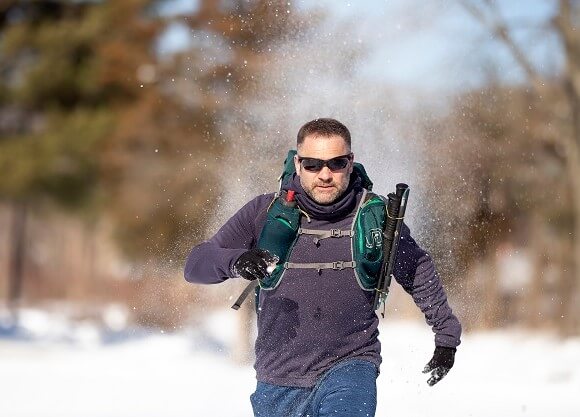 It is not unusual for college students to travel during spring break for surf and sand or service-learning trips.

However, one non-traditional Quinnipiac student embarked on a most unusual journey that took him across 365 miles over nine days in the footsteps of a mysterious Connecticut and New York legend.

“I have only been here since August,” Lee-Stuart Evans, MAT ’20, a School of Education graduate student from England said of a traditional spring break. “Could you think of a better way for me to get a feel for Connecticut and its people and culture?”

As part of his journey that led him through 41 cities and towns throughout Connecticut and New York, he walked down Mount Carmel Avenue in front of Quinnipiac’s main entrance and by Sleeping Giant State Park. He slept outside and ate at local restaurants along the way — and ultimately raised hundreds of dollars for the Connecticut Cancer Foundation, Connecticut Coalition to End Hunger and the Connecticut Parks and Forests Association while setting a new Fastest Time Record.

Evans set up a Go Fund Me page as part of his latest adventure and donated the proceeds in honor of the Leatherman to the Connecticut Cancer Foundation, Connecticut Coalition to End Hunger and the Connecticut Parks and Forests Association.

“I stumbled across the legend of the old Connecticut vagabond when out trail-running,” Evans said. “I kept seeing trails showing ‘Leatherman’s Cave’ on them in various places — and I soon stumbled down a deep Wikipedia hole that left me with a huge desire to ‘go run that loop.”

As the story goes, in 1883, a man appeared with startling regularity between 41 towns in a loop that spanned 365 miles. Every 34 days, he would appear at the same town. He did this for six years before dying on March 20, 1889.

The man wore a handmade leather suit, carried a heavy bag and slept in caves along the route. Evans has researched and read much about the Leatherman. He also visited the Connecticut Historical Society Museum to view a collection that included the Leatherman’s glove, satchel and money bag.

“When you are on foot and when you are tired, you have very basic needs of food, shelter and rest,” Evans said.

“Everything else is stripped away. It is always inspiring when a complete stranger joins and supports me. When you are at your worst, you sometimes find other people at their best. I think that is what the Leatherman saw.”

Evans is no stranger to adventure. He currently holds four Fastest Known Times records, including one for traveling the longest inland trail in the United Kingdom at 625 miles. He braved the heat during a 160-mile ultramarathon across the Sahara Desert and battled the cold as part of the first team to cross the 100-mile frozen Lake Khovsghol in Mongolia. He runs an estimated 2,500 miles per year.

“I set a Fastest Known Time on a route that has been known for more than 130 years, but more than that, I have seen some of the most breathtaking scenery that Connecticut has to offer, made new friends, dodged thunderstorms, floods and ice and snow and 45 mile-per-hour winds and come to have a much greater love for one of Connecticut’s most enigmatic legends,” he said.