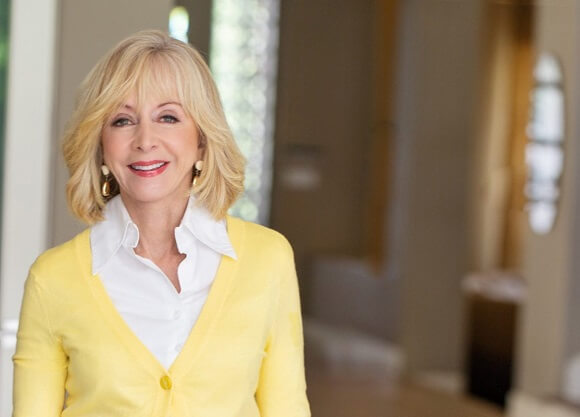 There is an unaffected sophistication about Judy Olian, who begins her tenure today as the 9th president of Quinnipiac University.

As the former dean and John E. Anderson Chair of Management at the UCLA Anderson School of Management, Olian brings extensive experience in leading academic institutions, innovative programming and fundraising to Quinnipiac.

She is eager to get started and wants to be accessible to the university community, both in person and through Instagram and Twitter. Olian describes herself as a relationship person. Others describe her as a forward thinker with boundless energy.

“I want to learn as much as I can. I’m coming into a new place that I don’t know much about,” Olian said candidly. “There’s a rich history and an inspiring legacy of bold growth here. I’m fortunate that I’ll be standing on the shoulders of the successes of President John Lahey and the entire Quinnipiac community.”

Olian wants to hear what students, alumni, faculty and staff have to say about their university. She plans to continue her signature open-door policy and to host personalized social gatherings. She’s also excited about the prospect of spontaneous and lively conversations on the quad, the Rocky Top Student Center and the North Haven Campus.

After cultivating a distinguished career of academic excellence, Olian is well positioned for her new role and responsibilities.

At UCLA Anderson, one of the most respected business schools in the world — The Economist ranked it No. 6 globally in 2017 — Olian increased gender diversity among faculty and students, hired more than 60 percent of the current faculty, launched four new research centers, globalized the school’s reach, and led fundraising of more than $450 million.

Before her 12-year tenure in Los Angeles, Olian served as dean of Penn State University’s Smeal College of Business and as senior associate dean at the University of Maryland’s Robert H. Smith School of Business. As a student, she earned a bachelor’s degree in psychology from The Hebrew University of Jerusalem and a master’s and PhD in industrial relations from the University of Wisconsin-Madison.

Throughout her career, Olian has been an influential speaker and a champion of innovations in learning programs. Growing up in Australia, having lived in Israel and Europe, and now the United States for the last 40 years, she believes that higher education has a higher purpose. She is an evangelist for diversity and inclusion, and for global connectivity of minds and cultures.

“To me, inclusivity is a social imperative. We must embrace every corner of society and create futures for entire communities through education. There is no more transformational lever in one’s life than education,” Olian said. “Education shapes a person’s life, and it is our obligation to nurture our students into becoming enlightened global citizens prepared for careers of the 21st century.”

As part of that mission, Olian will support Quinnipiac’s longstanding efforts to recruit international students. The university’s Class of 2021, for example, includes students from Australia, Brazil, Finland, Lithuania, Nigeria, Vietnam and Zimbabwe, among other countries.

“To be a global citizen, you need to have spent time to learn from the experiences of somebody from Mongolia, Fiji or Kazakhstan, not to mention, China, Indonesia, New Zealand or Guatemala,” Olian said. “That is part of the learning experience to which I’m committed. That’s very much part of my DNA.”

Another goal of hers is to expand the learning options available to students. At UCLA Anderson, Olian developed new programs including, for example, social impact and data analytics, and also launched the Dean’s Distinguished Speaker Series. Guests included Ursula Burns, former CEO of Xerox; Howard Schultz, former CEO of Starbucks; Penny Pritzker, former U.S. Secretary of Commerce; and our own William Weldon ’71, chairman of Quinnipiac’s Board of Trustees and former CEO of Johnson & Johnson. She is considering launching a similar series at Quinnipiac.

“We need to make sure we’re seeing inspiring and diverse models of leadership, social responsibility and innovation,” Olian said, “for example by offering our students, faculty, staff and alumni exposure to some iconic leaders and trailblazers.”

Olian has witnessed Quinnipiac’s increased presence on the West Coast. “Discovering the breadth of the Quinnipiac network has been eye opening,” she said, sharing a few examples of the university’s brand reach.

Shortly before she was introduced as president, Olian met with top executives from Deloitte, one of the Big Four accounting firms and a leading employer of UCLA Anderson graduates. During the conversation, Olian asked those in attendance where they were from.

“I did my undergraduate and graduate studies at Quinnipiac,” a Deloitte senior executive told her, somewhat serendipitously, asking if she’d heard of Quinnipiac!

Olian heard a similar connection from Andy Campion, the CFO and EVP of Nike and a member of UCLA Anderson’s Board of Advisors. “My dad graduated from Quinnipiac,” Campion said. “He’s very proud of it.”

Olian embraces these connections and looks forward to building more, as she meets and connects with many of the university’s stakeholders over the coming months.

The new president likes to start her day with exercise — often a cycling class. When she’s not working, Olian and her husband, Peter Liberti, enjoy cooking and entertaining, active travel, attending theater, museums and sports events, especially tennis which is a special passion of her husband, Peter, who is an avid player.

Olian also enjoys reading. Two of the books Olian has read recently are “When Breath Becomes Air” by Paul Kalanithi and “Thinking, Fast and Slow” by Danny Kahneman, a Nobel Prize winner and incidentally also her statistics professor when she was a sophomore at the Hebrew University.