Students get inside look at transfer of power 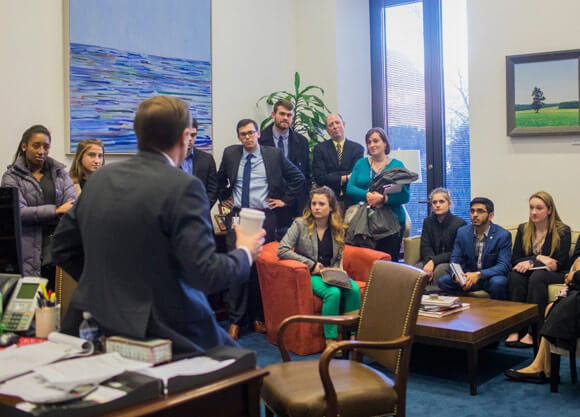 Murphy Siegel ‘18 believes every American should witness a presidential inauguration.

“It’s probably one of the most spectacular things I’ve ever seen in my life,” said Siegel, who attended President Donald Trump’s swearing in on Friday.

“It cannot be described,” he said “To see the military saluting, to see the peaceful transfer of power — it’s incredible.”

Attending the inauguration was the grand finale of a two-week seminar led by Political Science Professor Scott McLean. As part of the three-credit course, 38 Quinnipiac students were housed in Washington, D.C. They spent their mornings attending lectures, and the rest of their busy days visiting sites, such as the U.S. Capitol, Arlington National Cemetery and the United States Holocaust Memorial Museum, as well as writing papers and shaking hands with the country’s political elite.

“Every inauguration is different,” said McLean, who has been running this seminar since the turn of the century. “But the constant is how the Quinnipiac students have a transformative experience. Witnessing the peaceful transfer of power in person is the climax, of course. But the real transformation takes place days earlier. It happens as the students realize they do have the capacity to stand at a microphone in front of hundreds of people to ask a pointed question of a nationally known speaker. Or when they discover that they do have the networking ability to drop in at U.S. Senate and House of Representatives offices to request inauguration tickets.”

McLean noted that this was the least attended inauguration he’s ever attended.

“I kind of expected that, but it was almost eerie to have the city prepared for so many millions of people and they just didn’t come,” he said. “It was also the least ethnically diverse inauguration I’ve been to.”

Still, most Quinnipiac students said they were thrilled to be a witness to history. Through a family connection, Siegel, a political science major, scored VIP tickets that allowed him to view the parade and inauguration from the comfort of the seventh floor of the Newseum. His favorite part was watching President Barack Obama board the helicopter often called Marine One at the U.S. Capitol for his first trip following his presidency.

Most students had standing-room tickets on the National Mall.

Antoine Campbell ‘18, who is staying in Washington, D.C. for the spring semester to be a legislative intern at the Iraq and Afghanistan Veterans of America nonprofit, woke up at 6 a.m. to ensure he would get a spot. But he found it was not crowded.

“We were able to walk up pretty close actually,” he said.

Trump’s best moment of the day, according to Siegel, occurred when the new president led a standing ovation for Hillary Clinton at the U.S. Senate luncheon.

“That was the first time we’ve really seen him act presidential,” he said.

McLean said he found the speech “surprisingly untethered to the ideals of the American tradition.”

Many Quinnipiac students attended one of many inaugural balls on the night of the inauguration.

“There was a lot of glitz and glamour,” he said. “As somebody who wants to live in D.C. right after college, it’s exciting to feel like you are part of this exclusive club,” he said.

Campbell went to the All American Ball, where he said he was thrilled to meet astronaut Buzz Aldrin.

“I got to shake the hand of a man who was on the moon; that was cool,” he said. “I also became friends with an Air Force colonel. The line to get in was out the door, so we just started talking. He ended up giving me his card.”

McLean found the formal evening events to be the perfect ending to the two-week seminar.

“[The students] looked so nice going out to the balls, and they were so excited and proud that they were representing Connecticut and Quinnipiac,” he said. “It was wonderful.”