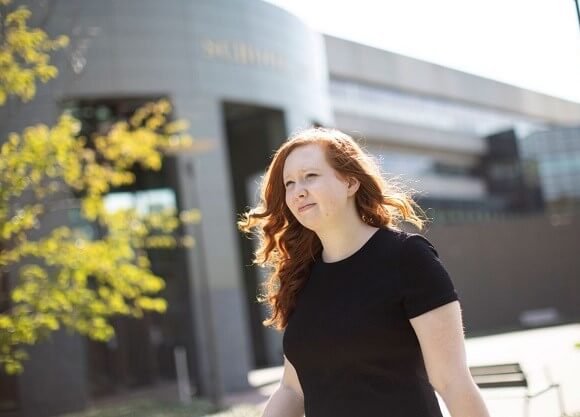 For Nicole Dwyer ’16, JD ’19, the math made sense, just like studying the law made sense.

After crushing her Advanced Placement exams at Medway High School outside of Boston, Dwyer arrived at Quinnipiac in 2014 with enough credits to earn sophomore standing. As it turned out, she was just getting started.

Dwyer, already enrolled in the 3+3 accelerated dual-degree program, spread her wings and never looked back. Quinnipiac’s 3+3 program is designed for motivated students like Dwyer to earn a bachelor’s degree and a law degree in six years instead of the typical seven.

In May, Dwyer became the first Quinnipiac student to finish the innovative 3+3 program in five years — a year sooner than the program’s accelerated pace. After earning her bachelor of arts in political science in 2016, she walked across the stage with her juris doctor this spring.

“Because I knew I wanted to go to law school, everything just fell into place,” said Dwyer, the editor-in-chief of the Quinnipiac Law Review this year.

“I did the undergraduate portion of the 3+3 in two years and the law portion in three. My undergraduate and law school advisers were great working with me to make sure I could finish everything the way I wanted.”

Dwyer said her time as editor helped prepare her in countless ways.

“Being the editor-in-chief of the law review was an invaluable experience,” Dwyer said. “I had the opportunity to fine-tune my writing and editing, to learn management skills, and to work with lawyers and law professors from around the country to publish their scholarship.”

“Competing on the mock trial team has been my favorite experience during my time at the Quinnipiac School of Law,” Dwyer said. “Mock trial has taught me persuasion, public speaking and advocacy skills that I will apply throughout my career. Working with our coaches to put together a full trial and competing against other schools from all over the country is just one example of the practice-ready education that Quinnipiac offers.”

Along the way, Dwyer also worked at two law firms in New Haven.

Last summer, Dwyer worked at Wiggin and Dana LLP learning about medical malpractice and employment law as a summer associate.

After that experience, Dwyer decided she was interested in representing defendants for a career. Wiggin and Dana, meanwhile, was interested in hiring Dwyer and offered her a full-time job. She starts this fall.

“I was the first person in my family to go to college, so my mom bought all these books about colleges for Christmas my senior year of high school and put them all in my stocking,” said Dwyer, the oldest of three children.

“Everything I’ve been able to do is because of my parents. They taught me the value of hard work. They didn’t come from much, but they made a fantastic life for our family.”

That life became a little more fantastic in May when Dwyer’s mother, Michelle, graduated from Harvard University with a bachelor’s degree. She works as the director of collaboration services for Harvard University Information Technology. Dwyer’s father, Brian, is an elevator mechanic and part of the bedrock of Boston.

“They’ve both gone way beyond what I ever expected from a professor, in terms of helping me figure out what I wanted to do and how to apply for positions,” Dwyer said. “They’re both so inspiring because they’re people who are really passionate about the law and helping students. You can’t help but be inspired and feel the same way.”

Dwyer said studying law in a collaborative, accepting environment at Quinnipiac was essential to her success.

“So many people here are doing amazing things — the professors, the students, everyone. Just by being around people like that, it humbles you and inspires you,” Dwyer said.

“It’s a place where people help each other succeed. Going to law school here was one of the best decisions I’ve ever made.”