A book 250 years in the making 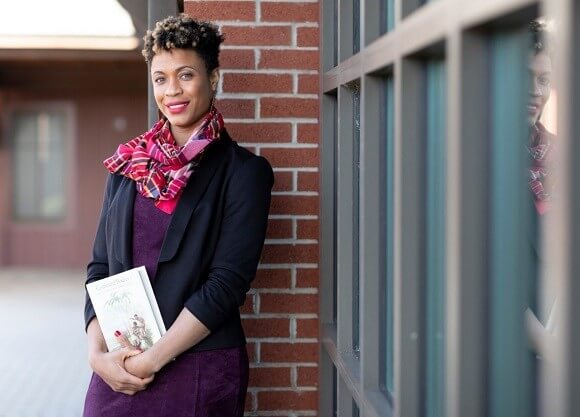 One by one, the hands went up at the Auburn Avenue Research Library in Atlanta — 21st-century women making important, visceral connections to 18th century enslaved women in Jamaica.

The audience participation reinforced what Sasha Turner, associate professor of history, learned after 10 years of research for her multiple award-winning book, “Contested Bodies: Pregnancy, Childrearing, and Slavery in Jamaica."

For decades, Turner explained to her Atlanta audience, white doctors from England — “man-midwives” as they were known — stopped the Afro-Caribbean childbirth traditions and rituals of slave women. The doctors imposed European methods for childbirth to control the experience — and the women — by cutting the cord to the past.

Over the past year, Turner has spoken about her research to audiences in the United States and abroad — including New York, North Carolina, California, Seville, Spain and her native Jamaica. She said the racist oppression that existed 250 years ago in the colonies and the Caribbean persists in contemporary America.

“The stories of these women in the 18th century resonated with the women in Atlanta because they’re living the same legacies,” she said. “They’re still trying to navigate the state imposition of what childbirth should look like and where childbirth should take place.”

Several women told Turner about problems getting birth certificates for their children because they gave birth at home. Or they didn’t give birth with a licensed midwife present.

“Because we continue with these struggles, there’s a deep interest in understanding where those struggles originated,” said Turner, whose “Contested Bodies” earned the prestigious Berkshire Conference of Women Historians Book Prize in 2018.

In awarding the prize, the judges wrote: “Throughout the book, Turner never loses sight of the experiences of enslaved women themselves, illuminating how unfree women maintained their own childbirth and child-rearing rituals, resisting outside efforts to control their reproduction.”

Turner intended “Contested Bodies” for an academic audience. Since the book’s publication last year, she has presented to fellow historians at Yale, Harvard, NYU and other institutions, with invitations to speak at Princeton, Columbia and Rutgers this spring.

The library event in Atlanta and similar public settings marked a new experience and a broader reach for her work.

“You can never really tell the life of a book and how audiences will respond to it,” said Turner, whose exhaustive research included several trips to England and Jamaica. “I’m very pleased — and a little surprised, actually — with the public reception it’s received.”

Turner received a Letitia Woods Brown Memorial Book, Anthology and Article Award this fall for another work, “The Nameless and the Forgotten: Maternal Grief, Sacred Protection, and the Archive of Slavery.” The article, which also won the 2018 Maria Stewart Journal Article Prize, was published in the journal, “Slavery & Abolition: A Journal of Slave and Post-Slave Studies.”

“Slavery didn’t end on honest terms in the Caribbean. Slavery ended dishonestly,” Turner said, invoking Frederick Douglass. “Abolitionists came up with this elaborate scheme to end the slave trade first, and end slavery after that — but ending it in a way to protect British financial interests. It had nothing to do with securing the interests of enslaved women, their children or the enslaved population as a whole.

Even after the abolition of slavery in the Caribbean and the U.S., Turner said, the struggle of the black community continues. Access to education and economic opportunity has been restricted for generations of black people.

“We talk about the rise of Black Lives Matter. Why is that coming out now?” Turner asked aloud. “It’s coming out in response to that same precarity of black lives, so it feels like black lives are expendable, the same as it did back then.”