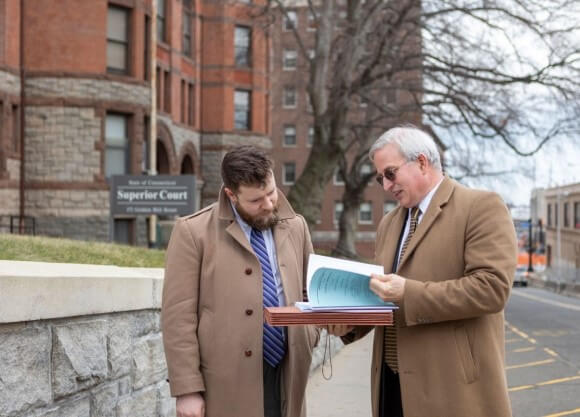 Through the Quinnipiac Defense Appellate Clinic, a recent law graduate and an adjunct professor were able to overturn a client's felony conviction.

Declan Murray, JD ’18, and James Streeto, a public defender and part-time law professor at the Quinnipiac School of Law, successfully exonerated a client who had been wrongfully convicted. The unnamed individual had been convicted of burglary, a third-degree felony, as well as sixth-degree larceny.

In 2018, as a Quinnipiac law student, Murray conducted extensive research and legal analysis, writing several drafts of the brief — under the guidance of Streeto — and filed it with Connecticut Appellate Court. They successfully persuaded the appellate court to overturn the felony burglary conviction.

Earlier this year, the client was resentenced only on larceny in the sixth degree, a low-level misdemeanor, and her remaining sentence and probation were terminated.

Murray now works as an attorney for a Manhattan-based criminal defense firm. He credits experiences like this that he gained through the Quinnipiac Defense Appellate Clinic for his success.

“Jim taught me how to research, write, prepare and approach legal issues like a practicing lawyer,” Murray said.