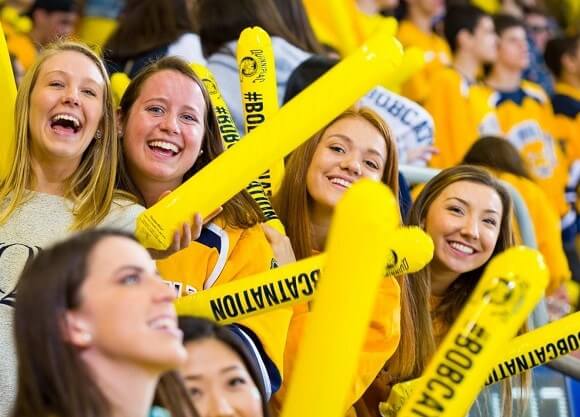 The People's United Center at Quinnipiac will be at capacity tonight as thousands of students, alumni, parents, faculty, staff and friends cheer on the No. 4 nationally ranked Quinnipiac men’s ice hockey team when they take on the Yale Bulldogs at 7 p.m. — the fiercest rivalry in college sports.

Fans unable to make it to the game may watch on ESPN+, listen at WQUN.com and get live stats on QuinnipiacBobcats.com.

The energy began to build on Sunday morning when students’ phone alarms rang out throughout residence halls, houses and apartments throughout Hamden and North Haven.

Students rushed to their laptops in hopes of scoring a golden ticket and a chance to cheer on their beloved Bobcats in one of the most spirited traditions at Quinnipiac. It took only 25 seconds for the hundreds of student-section seats to sell out.

“My friends and I made sure that we made it to every hockey game our freshman year,” reminisced Mackenzie Campbell ‘19. “For the Yale game, we heard that when large groups of students try for tickets that the server slows down and we wanted to make sure that nothing got in our way of getting a ticket.”

Campbell still laughs when she thinks about the time her upperclassman friends drove her and some of her first-year roommates to McDonald’s for chicken nuggets — and a chance to score the golden tickets beneath the golden arches.

“I remember frantically refreshing the tickets page,” said Campbell. “I’m sure the employees thought we were crazy as I screamed with excitement when I finally got a ticket.”

Despite having grown up near Boston, she has never experienced a rivalry quite like this one.

“The student section at the game is out of this world,” Campbell said, smiling as she thought about it. “It really shows just how passionate #BobcatNation is.”

For many younger Bobcats, this is their first  chance to attend the legendary game. The Heroes Hat trophy was established in honor of those who risked or lost their lives following the terrorist attacks on September 11, 2001. It remembers Joseph Mascali (FDNY/Staten Island 5), father of Quinnipiac alumni Chris and Jenn Mascali. This is the 17th anniversary of the game.

“I was very excited to get a ticket this year considering the incredible demand,” said George Tzimorangas '20, JD '23, a sophomore majoring in economics in the 3+3 accelerated, dual-degree law program. “I have wanted to attend the game since my freshman year because I have always been a sports fan and love the rivalry.”

“It is a tradition at this university to go to at least one of these iconic games — especially when both of these teams are consistently at the top of the ECAC Hockey standings,” said Tzimorangas.

Kirby Paulson ‘19 has attended the Heroes Hat game during all 4 of his years, and says he loves the energy.

“The atmosphere at the Yale game is second to none when it comes to hockey season,” explained Paulson. “The students show up in droves and you can see how the team feeds off the energy.”

In fact, despite the doors not opening until 6 p.m., students line up around lunchtime — and are often greeted and served warm treats by coaches, staff and, of course, Boomer the Bobcat!

“It’s a perfect example of our school’s community and one of the many amazing experiences that Quinnipiac has to offer,” Paulson said.