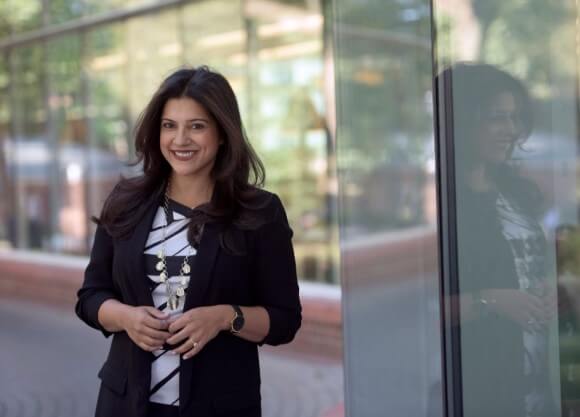 Reshma Saujani founded the Girls Who Code organization to get more girls interested in computers and technology.

Reshma Saujani, founder and CEO of Girls Who Code, said it’s possible to close the gender gap in technology by shattering stereotypes and offering girls more opportunities to explore careers in the field.

Saujani presented the lecture, “Designing a Better Tomorrow: Overcoming the Gender Gap in Technology,” Oct. 5 on the Mount Carmel Campus.

“Tech jobs are among the fastest growing in the country, yet girls are being left behind,” Saujani said. Although girls’ interest in computer science ebbs over time, the biggest drop off happens between the ages of 13-17. “By 2020, there will be 1.4 million jobs available in computing-related fields. U.S. graduates are on track to fill 29 percent of those jobs. Women are on track to fill just 3 percent,” she noted.

Saujani said the scarcity of women in technology jobs matters from an economic perspective. “I think it’s one of our most pressing domestic problems,” she said, noting that more women are their family’s major breadwinner yet are working in low-paying fields.

So-called STEM jobs (science, technology, engineering and math) are most plentiful in the computer science area, where the largest gender gap is. “And, there is no pay gap between male and females in STEM jobs,” she emphasized.

Since 2008, there has been a huge increase in tech jobs, and two-thirds of them are in financial services, fashion and health care, and not in New York City or Silicon Valley, but in places like Delaware, Montana, Salt Lake City,” she said.

Girls Who Code teaches participants about computer science through a variety of real-world projects in several areas, including art and storytelling, robotics, video games, websites and app development. The organization has grown from 20 female participants in New York to 10,000 girls in 42 states.

“That’s the same number of girls who graduate each year with a degree in computer science,” Saujani said. “That's progress.”

Saujani is a graduate of Yale Law School. She began her career as an attorney and activist. In 2010, she ran for a Congressional seat in New York, losing against an incumbent Democrat. During that race, she visited local schools and saw the gender gap in computing classes firsthand, which prompted her to start Girls Who Code. She also has served as deputy public advocate for New York City. She is the author of “Women Who Don’t Wait In Line,” in which she advocates for a new model of female leadership focused on embracing risk and failure, promoting mentorship and sponsorship, and boldly charting your own course — personally and professionally.

She’s come to the conclusion that girls do not think the tech industry is open to them because there are few role models. “You cannot be what you cannot see,” she said.

"Tech jobs are among the fastest growing in the country, yet girls are being left behind." said Reshma Saujani, founder and CEO of Girls Who Code