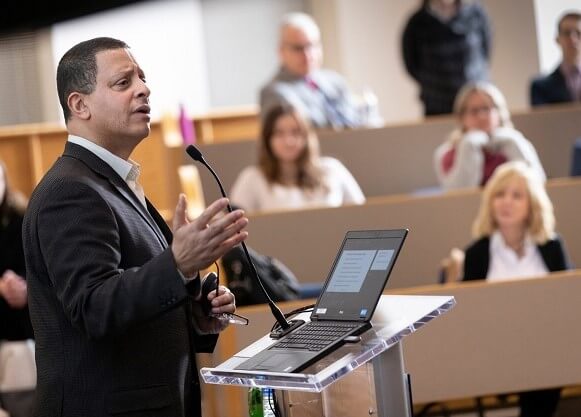 As Americans live through one of the most critical eras in the nation’s history, they should resist the urge to wring their hands in despair and instead embrace the opportunities the era presents, said Blair Taylor, former CEO of My Brother’s Keeper Alliance.

“We have not effectively tapped into our diversity, one of our greatest assets — and there is a strong and compelling business case for diversity,” he said, adding that unlocking the power of the era means putting energy against the biggest issues and threats so that innovation can flourish and old paradigms can shift.

Taylor presented a public lecture titled, “A Diverse World of Opportunity,” on January 31 to a packed audience of students, faculty and staff in the Mount Carmel Auditorium. He is the managing partner in XFC Partners (X-Factor), a firm he founded to create sustainable links between the globe’s largest corporations and untapped sources of talent. He also has served as president and CEO of the Los Angeles Urban League. He was invited to Quinnipiac by President Judy Olian, former dean of UCLA’s Anderson School of Management, from which Taylor graduated with an MBA

The quest for diversity and inclusion has guided Taylor’s distinguished career and is what inspired him to head My Brother’s Keeper, the nonprofit launched by President Barack Obama that focuses on building supportive communities for boys and young men of color where they feel valued and have pathways to opportunity.

And opportunity is what he sees now.

“It’s time for us to be bold. The federal government is broken, and the lack of civility is detrimental,” he said, saying that government requires compromise and collaboration, and it grinds to a halt when people don’t talk to each other.

He shared a story about a longtime Congressional historian he met who lived through the civil rights riots, nuclear threats and assassinations of the mid-1960s, when people wondered if the U.S. would survive. The difference between then and now, the staffer noted, was that politicians from both sides of the aisle would debate the issues during the day and break bread together at night. “Now, they pass each other in the halls without saying, ‘hello,’” Taylor said.

“But we’ve been through worse, and we will get through this as well,” he stated, cautioning his audience not to sleep through the era, or be discouraged, overwhelmed or paralyzed by news and events.

Diversity is important, he said, because “breathing your own exhaust” by only listening to people who agree with you often leads to stagnation. Yet Taylor, a former member of the global leadership team at Starbucks, said 97 percent of corporate leadership teams in the U.S. do not reflect ethnic diversity.

He quoted Margaret A. Neale, a professor in the Stanford University Graduate School of Business who explored the issue of diversity in the workplace. She found that the worst kind of group for an organization that wants to be innovative and creative is one in which everyone is alike and gets along too well. Her research indicated that diverse groups by their very nature anticipate conflict and therefore are better prepared for it.

“And the more diverse the group, the higher the collective IQ, the better it will be at solving problems over just the smartest person in the room,” he said.

Taylor said that some attempts to create diversity can result in tokenism, which he described as “putting one woman in a room with 42 men.” Wanting to create a diverse workplace and achieving it means looking at the unconscious biases or preconceived notions we harbor that influence our thought processes, he said. Keeping the status quo is easier, and there is a self-fulfilling prophecy that prompts tokenized employees to quit because they feel out of place. Another recognized damper on achieving diversity is having HR and recruiting teams with no people of color on them.

During his talk and the Q&A that followed, Taylor offered everyone in the room, and especially students, some tools to help them make a personal and positive impact.

We need to understand the difference, he said, between diversity and inclusion and practice them both, as well as empathy. “Diversity says, ‘How many people are in my sphere of influence who don’t look or think like me’ while inclusion says, ‘I value their opinion, and I don’t try to turn them into me or make them something they are not,’” he said.

He also recommended that students be open to “smart” risks. “If you are afraid of failure, you can become paralyzed. Realize that you are going to have setbacks, it’s how you deal with them. I’ve run into walls, but there’s not a wall I’ve met that I couldn’t figure out how to circumvent. Persevere.”

Senior Allison Kuhn, a finance and management double major and the vice president of the Class of 2019, asked Taylor for advice on breaking down barriers to increase diversity on campus. He suggested inviting groups of three of four diverse students into a meeting room.

“Demystify what is happening in that room. They will think, ‘Oh, I can have a voice here.’ Give them a pathway to participate.”

He also warned his audience to watch out for the notion that increasing diversity will exclude someone else. It’s about welcoming new people to the table and recognizing that they have not been welcomed in the past.”

Taylor conversed with about 20 students at an informal luncheon earlier in the day. He leaned in to make his points, and they hung on his words as they shared their career dreams with him. “Push an envelope in your career, even it if puts you out there and exposes you –– even if you cross with the boss, but you know it’s the right thing to do. Stay in the game, and when you are knocked down, get up! Don’t let your spirit get extinguished.”