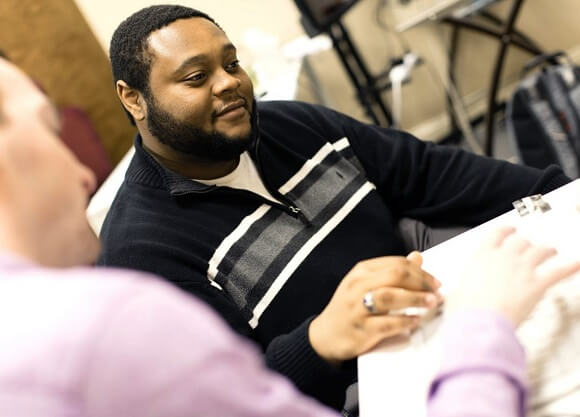 Ron Burgess ’15 looked inside the muscular tissue of his heart and watched it contract and expand in that beautiful, familiar rhythm. He watched the chambers work together. He watched the aorta sit like a crown atop the heart. All at once, it was a magnificent, even mystical sight.

He wasn’t dreaming. He was viewing a three-dimensional hologram hovering just a few feet in front of him. Burgess helped to create and test the “Learning Heart” with Ashley Barbuito ’15 and other team members at SphereGen, a New Haven-based company that develops software solutions and digital products, often with game-based applications. Senior Christopher Laferriere worked on the device during its testing stage as an intern.

The Princeton Review has ranked Quinnipiac’s game design program among the top 30 internationally.

“What I saw with Quinnipiac’s program that I have not seen with other programs is the emphasis on team collaboration,” Dinsmore said.

It was the perfect preparation for real life and working at SphereGen.

“Everybody has different roles on our team. Ashley cycles more in the art and 3-D world. Ron is on the programming side,” Dinsmore said, looking at both of them as he told a story. “In the first weeks and months of the job, you were in front of Microsoft presenting, you were in front of crowds of people. And that’s real life. You guys were very well prepared for that.”

During a recent “Learning Heart” demonstration, Burgess wore a mixed reality headset to bridge the real world and the digital world. With the headset, he could navigate and control the “Learning Heart,” which was created as a teaching tool for St. George’s University School of Medicine in Grenada.

It is one of the many projects Burgess and his colleagues have worked on at SphereGen, including VeyeZER, the first holographic eye test, and DICOM Director, which radiologists use to review and share 3-D image models of bones and other tissues.

With one wave of his hand, Burgess can turn the “Learning Heart” 360 degrees. With another wave, he can separate the heart’s major components like a floating, anatomical puzzle. It’s all part of SphereGen’s innovative, hands-on experience in the digital world.

Looking back, Burgess said Quinnipiac’s commitment to teamwork in class was invaluable. His first exposure to this idea was a scrum cycle, where teams were challenged to design and deliver a project on deadline as a team.

“The very first time that we did something like a scrum cycle in one of my classes, I was intrigued by what it was and what it meant,” Burgess said. “Up until we started doing the scrum cycles … we kind of all just got together and we didn’t necessarily have an understanding of what we were doing.”

Barbuito, a 3-D artist at SphereGen, strongly agreed with Burgess.

“It was definitely beneficial to work with people you don’t normally work with,” she said. “When you’re in school, you want to work with your friends. You can’t do that out in the real world.”

In addition to scrum cycles, Barbuito said mock interviews and mock presentations at Quinnipiac helped to prepare her for professional success.

Laferriere, who will graduate in May with bachelor’s degrees in computer science and game design and development, worked extensively on another SphereGen project, SmokeOut. The idea originated after the New Haven Fire Department sought a new, engaging way to teach fire safety to schoolchildren.

SmokeOut is an interactive game where students find themselves in a 3-D bedroom. They can open and close doors, use a phone and apply other survival strategies. The goal is to safely escape the room or stay safe until firefighters arrive.

"My GDD classes at Quinnipiac prepared me for the job because we focused on developing applications in Unity, which is the 3-D engine I use to produce for the HoloLens,” Laferriere said.

The HoloLens, a Microsoft product, is described as “the first self-contained, holographic computer” on its website. It is used to help developers create mixed reality applications.

“I came to the job with a decent programming foundation,” Laferriere added. “I could already develop applications start to finish, and simply needed to learn the HoloLens specifics to be able to produce in this platform as well.”